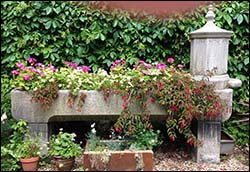 Visitors to the house yard at Bodrhyddan can see an animal trough which was once on the market premises in Queen Street, Rhyl. Made of stone, it was donated by an animal lover and positioned near the cab stand. Horses which drew carriages in the town could drink water from the trough, a small section of which was intended for thirsty dogs. The trough was moved from Queen Street to Bodrhyddan in 1973.

Family legend had it that the trough was given to the town of Rhyl by Marian Rowley Conwy, of Bodrhyddan. Research carried out by Rhyl History Club has revealed that it was presented to Rhyl by the first master of Rhyl rail station, Thomas Winston, in 1877. It is not surprising that the origins of the trough were unclear. The Rhyl Record and Advertiser reported, in the same year, that Mr Winston declined to have his name inscribed on the trough. He wanted no fuss and requested that an inscription, if one was required, should simply read: "The Gift of a Friend to Animals."

Mr Winston, born in 1815, was a great benefactor to the town of Rhyl. Among other positions, he was a Rhyl Commissioner from 1868 to 1871. For 18 years, he sat on the St Asaph Union Board of Guardians, which managed the workhouse where the journalist and explorer Henry Morton Stanley was raised.

After retiring as stationmaster he lived at Bodannerch, the house built by his father, a vicar who had inherited Caribbean estates and slaves.

Mr  Winston’s obituary in 1889 stated that “he devoted his time entirely and absolutely to the furtherance of the prosperity of Rhyl” and “abhorred all pompous vanity”. He is remembered in St Thomas’ Church, Rhyl, with a brass plaque and a stained glass window. He is buried at Morley Road Park, which is alongside his beloved railway.