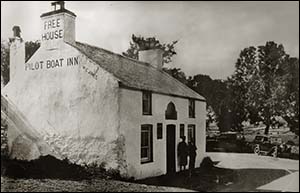 This original part of this building was reputedly once a smithy. A little further up the hill is the hamlet of Brynrefail, which means “Hill of the Smithy”.

Lower down the hill from the pub is a small cottage called Efail Bach (“Little Smithy”). This may have been the home of a blacksmith, but it’s not known where he practised his trade.

The pub has its back to the road. The road used to snake around the front of the pub, as seen in the old photo on the right. A new, straighter route for the road was later engineered, taking traffic behind the property.

The bar inside is made from the prow of a wooden boat. One section of the boat was cut to form an opening section for bar staff.

Parked on what used to be the main road is a Playbus, containing children’s play equipment. This double decker bus, a GM Standard Atlantean, was built by British Leyland in the mid-1970s for services in Greater Manchester. In the late 1980s and early 1990s it was part of the Fylde Borough Transport fleet, running in and out of Blackpool.

City Dulas is the name of the small village down the hill from the Pilot Boat Inn. Dulas means “Black stream”. Du = black. Glas = stream. Citty Dulas is written on a map dating from 1763, and may have been an ironic name for the buildings which clustered around the mills there.