Now home to the National Slate Museum, this building was erected in the 1860s as the workshops of the thriving Dinorwig slate quarry. It is listed Grade I as one of Britain’s best-preserved industrial buildings of the Victorian age. 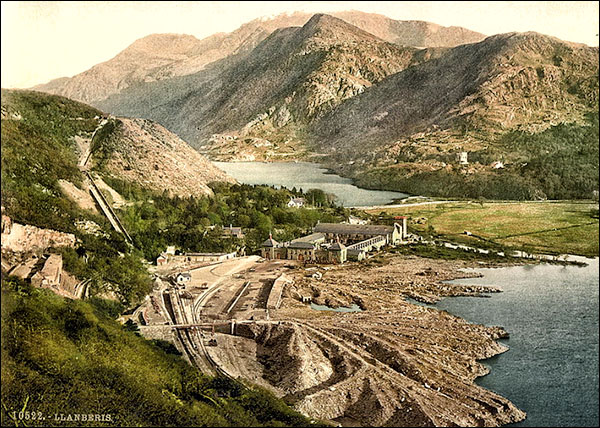 In May 1869 the press reported that there were now extensive workshops at the foot of the incline which led from the quarry to Gilfach Ddu. The new complex replaced facilities near the steam-powered mills higher up, near Allt Ddu. The photo from the 1890s shows the workshops, with waste rock being tipped where the car park now lies.

The site is rectangular around a central courtyard, like an old British Empire fort and many factories and breweries. Its windows have unusual cast-iron frames, the wooden pattern for which can still be found in the Pattern Loft. A giant waterwheel powered all the machinery in the workshops via a rotating shaft connected to belts – machinery such as drills and lathes. The waterwheel can still be seen turning today.

There was also a smithy and a foundry for casting in iron or brass. On the east side were facilities to repair the steam locomotives which worked in the quarries and along the Padarn Railway, now the Llanberis Lake Railway. The facilities enabled the quarry to fabricate spare parts for machines and components for railway tracks and inclines.

When the quarry closed in 1969, a busy time followed of negotiations and correspondence between enthusiastic individuals, national establishments, the county council and the Welsh Office.  It was decided that the county council would buy the building, the Department for the Environment would look after it and the National Museum would develop it as a museum.

Visitors today can view all areas of the museum, including the Pattern Loft – filled with original wooden patterns for casting hundreds of different objects. Another highlight is the row of quarrymen's houses, moved from Tanygrisiau to the museum in 1999. There are regular demonstrations of slate-splitting and blacksmithing, exhibitions, events and courses. Follow the link below for museum information.