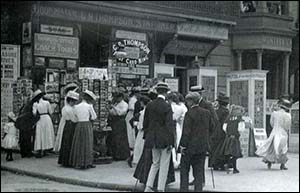 The “Postcard King” used to sell picture postcards, books and stationery from this building, now home to Seymour's café. George Robert Thompson also had shops on Mostyn Street and a kiosk on the pier.

Born in North Yorkshire, he served his apprenticeship as a printer in Hull before arriving in Llandudno in 1877. Along with war veteran and mountaineer William “Zulu” Smith, he founded the Llandudno Advertiser newspaper and opened his first shop at 19 Mostyn Street selling both newspapers and haircuts. He employed a barber as well as being a newsagent! 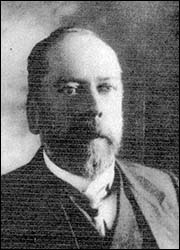 As Llandudno’s popularity as a holiday resort continued to grow, Mr Thompson (pictured left) sold a wide variety of picture postcards in increasing numbers. The old photo above shows women choosing postcards from the stands outside his South Parade shop.

He bore an uncanny resemblance to King Edward VII, who was monarch between 1901 and 1910. Therefore he started publishing the postcards with the title “Postcard King” on the reverse – together with a portrait of himself so that the recipients could see the similarity! 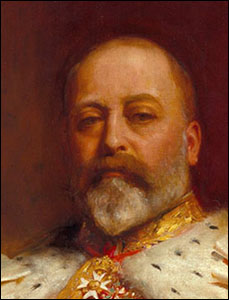 He is depicted on the left, and King Edward VII on the right.

G R Thompson’s first wife Ellen died of Typhoid, after bearing their four children: Frank, John Owen, Annie and Robert. Frank and John Owen served with the Royal Welsh Fusiliers in the First World War. Frank was awarded the Distinguished Conduct Medal for gallantry, and John Owen died of wounds at Salonika in 1918.

G R Thompson’s grandson, Lally, was killed in the Wormhout massacre in the Second World War. During that war, plans were drawn up to convert the basement of this building into an air raid shelter for 45 people.

With thanks to Lalita Carlton-Jones, great granddaughter of G R Thompson, and to Adrian Hughes of the Home Front Museum. Also to the Royal Collection Trust for the king’s portrait