The medieval borough of Pwllheli was strategically sited beside a large natural tidal pool, where the river Rhyd-hir flowed past large sandbanks towards the sea. Pwllheli’s name means “brine pool” and was written as pwllhely in 1292 or 1293. 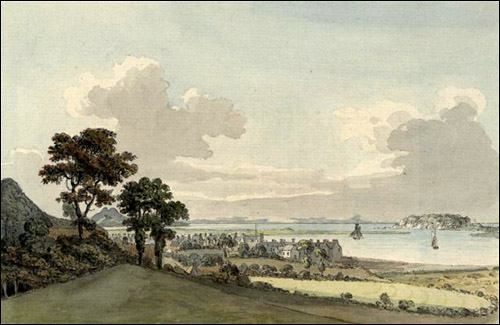 The main focus of human activity was at the western end of what later became the Inner Harbour. Many people were employed there in shipbuilding. From 1759 to 1878, more than 460 new ships were launched at Pwllheli.

In January 1752, a mob of townspeople, mostly women, rushed onto a sloop called Blackbird in the harbour. It had been loaded with potatoes, barley and rye. There had been another poor harvest in Wales and many people were starving. The mob's attempts to take some of the cargo were thwarted when bailiff Rosindall Lloyd read the Riot Act.

The drawing (courtesy of The National Library of Wales) shows the view across Pwllheli and its harbour in the 18th century. It was made for Thomas Pennant’s books about his travels around Wales. He wrote that Pwllheli had “a tolerable harbour for vessels of about sixty tons”, entered by a high rock called The Gimlet.

In 1808 Parliament authorised two new embankments to protect the harbour area, along with drainage of large areas of land. The photo below shows the harbour in 1890.

Improvements to form the Inner Harbour began in 1903, although by then the railways had taken over much of the trade formerly handled by coastal shipping. 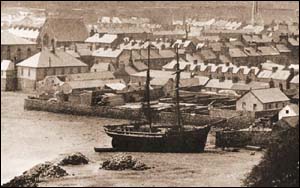 At the start of the 20th century, c.100 ships a year sailed from Pwllheli, often carrying agricultural produce for export and bringing in coal.

The demise of the harbour as a working port was hastened by siltation, which made access to the quays increasingly difficult for ships. The river Erch flows into the Inner Harbour at the north-eastern corner. Both rivers deposit material as their flow becomes slower here.

In the early 1990s the largely disused Inner Harbour was transformed by the creation on the eastern side of Hafan Pwllheli, a marina with 410 pontoon berths and supporting onshore facilities. By 2002 this was estimated to support 200 local jobs and bring in £20m of annual income to the regional economy.

The area is also used for watersports events, including the annual Wakestock festival which combines wakeboarding with music and other entertainment.