The view west from the cross-quarry footpath here provides a snapshot of how the quarry’s Garret department evolved in the 20th century. Please stay on the footpath and do not cross the fence. 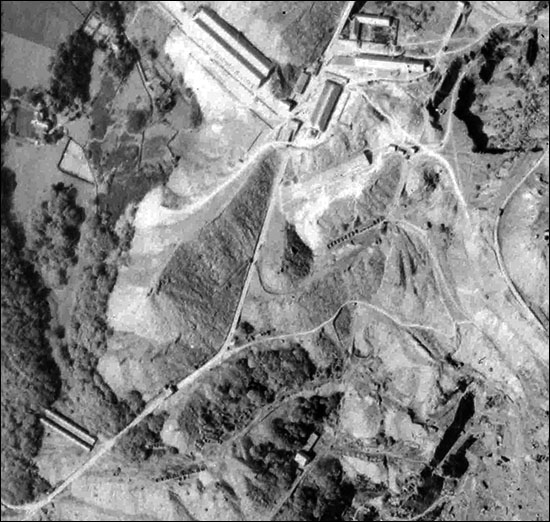 The photo below provides orientation. The aerial photo, courtesy of the Welsh Government, shows this area in 1946.

The plateau across the top is a long waste-rock tip (there’s another great view from the end of it). Slate was processed on a large scale on that level, known as Mills.

At the foot of the waste tip is the A3 incline’s winding house. In front of it is a levelled area where railway tracks led to the foot of A4 incline, which descended from Mills.

Slate left the quarry at the Mills level in the early decades, but the opening of the Padarn Railway (along the lakeside) in 1843 enabled slate to be transported easily from galleries below Mills. Early inclines in various places were replaced by the connecting A-series gravity inclines, which led to the Padarn Railway at Gilfach Ddu.

Another mill building was erected in 1935 on the gallery below Mills, known as Harriet. Its concrete base is still visible. Waste from Harriet was initially dumped near the A3 incline. It increasingly encroached on California, the next gallery down. You can see where the railway connecting California to A4 curved around the foot of this waste heap.

On that gallery you can see also the ruins of a row of huts where slate was split. This was one of many gwaliau (lairs) in the quarry. The huts were roofed but open to the elements on one side. They were superseded in the 20th century by the larger mills. The California gwaliau were abandoned by the 1940s. The aerial photo appears to show that four of the huts still had roofs in 1946.

There were 15 or 16 huts in the row but the walls of only six remain. Some are buried under the nearest of the twin waste heaps, which were deposited in the quarry’s last two decades before closure in 1969.

Many of the higher Garret galleries can be seen from the path north west of here.