If you look towards the sea from this point on the Wales Coast Path, you may spot a jumble of stones amid the sand. They’re all that remains of the former home of engineer Alfred Dickinson, a pioneer of electric tramway technology.

In 1915 he bought a parcel of land here from the Bodrhyddan estate and had Salem Bungalow built on it for himself and his wife Sarah. The building featured a veranda and a rooftop balcony. Parts of Rhyl’s golf course lay to the property’s east and west, but soon the sea was eating into this land. Mr Dickinson had a small sea wall built, but erosion continued.

He died in Rhyl on 21 January 1941. His relatives abandoned Salem Bungalow in 1944 and eventually it crumbled into the sea. 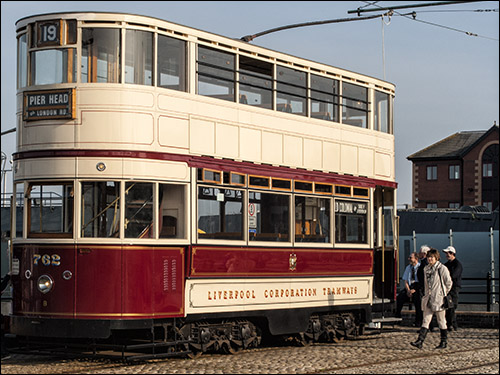 Mr Dickinson was born in Peterborough in 1856 and worked initially as a locomotive engineer with the Manchester, Sheffield & Lincolnshire Railway (later known as the Great Central Railway). He then joined a West Midlands tramway company whose steam-powered trams weren’t proving entirely successful. After visiting electric streetcar systems in the USA, he devised a swinging trolley pole to collect current from the overhead power-supply wire.

The pole was sprung to maintain light upward pressure on the wire. It swung sideways when the tram passed over curved track, maintaining contact where the wire wasn’t always precisely above the centre of the tram. The picture shows a preserved 1930s Liverpool tramcar on the Birkenhead Heritage Tramway, with the trolley pole reaching up from the roof to the wire in the top right corner.

The device enabled tramways to be electrified with one simple wire above each track. This was less costly, complex and unsightly than the webs of wires which were previously required.

Mr Dickinson went on to help establish tramways in cities across the world including Hong Kong, Cape Town, Madrid, Singapore and Dublin. Later he diversified into hydro-electric technology, in India and Australia. He patented many electrical devices and ran a company called Dickinson Patents Ltd.

His was buried at Rhyl’s town cemetery, following a service at Salem Bungalow.

With thanks to Ruth Pritchard of Rhyl History Club, and to Mike Ballinger and Peter Taylor