This is the longest stone bridge in Wales. It has 12 or 13 arches, depending on which side you’re looking at! That might seem to be overkill in normal conditions, but the apertures each side of the river Usk are essential when the river bursts its banks after heavy rainfall.

A bridge has crossed the river here since medieval times. The early structure was probably of timber and replaced or repaired after floods. A stone bridge, costing £400, was erected in 1706 and withstood the river forces until a flood in 1808. During the subsequent repairs, the opportunity was taken to widen the road. 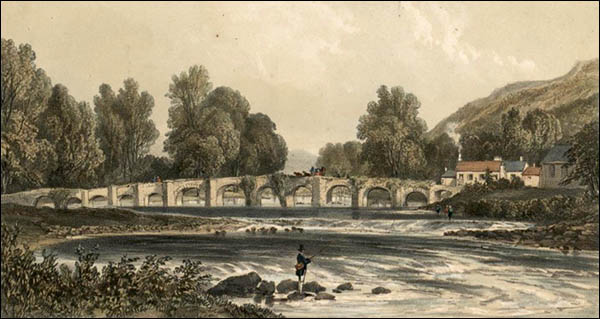 In the 19th century, travellers stopped to pay tolls at a toll house on the town side – now part of the Bridge End Inn. The picture of the bridge c.1865 is shown here courtesy of Llyfrgell Genedlaethol Cymru – the National Library of Wales.

Why the different number of arches on each side? A wider arch – replacing two earlier ones – was added on the upstream side of the bridge at the Crickhowell end in the 1820s. That coincided with construction of what is now the A4077, a bypass to avoid bends and congestion along the original route up from the bridge, via Bridge Street and High Street.

One of the most unusual journeys over the bridge was made by Randolph Morgan in January 1919 – carried on the shoulders of a crowd! As a Private in the Royal Army Medical Corps, he had survived the Battle of Mons – Britain’s first major battle of the First World War – and escaped from German captivity more than once. He was recaptured in May 1918 and released at the end of the war. Stepping off the bus in Crickhowell, he was greeted with “ringing cheers” and speeches. A bugle band headed the procession which carried him to Hillside, Llangattock, where his father, Lewis Morgan, lived.

The bridge’s survival for more than 200 years is a result of vigilance and preventative maintenance, as engineering techniques improved. In 1852, for example, the stonework on the Llangattock approaches was renewed at a cost of £10 10s. In 1867 the county surveyor declared that some of the piles on which the bridge rests needed renewing with “piles from 7 to 9 feet long” (2.1 to 2.7 metres). The weir downstream of the bridge was installed to retard the river water, thereby reducing the scouring of the bridge foundations by water and silt.

Further works were needed in the 20th century for the bridge to withstand the growing demands of motor vehicles. Cracks appeared in 1979, and a temporary bridge was installed alongside while the structure was repaired. In 2011 part of the parapet was damaged in an accident as a police car chased suspected vehicle thieves.