The original Castle here was built as a family home for Gerald de Windsor and his young wife, the beautiful Princess Nest. She had already borne a child by King Henry I. She had several children with Gerald, constable of Pembroke Castle.

Legend has it that Owain ap Cadwgan, son of a Welsh prince, kidnapped her in 1109. They lived together for a couple of years, reputedly conceiving two children, before she returned to Gerald.

The Castle, probably of earth and wood, was built on the site of an Iron Age fort. Sir Nicholas de Carew, a descendant of Gerald and Nest, improved the Castle using stone in the late 13th century, creating the inner and outer wards we see today.

In 1480 Sir Rhys ap Thomas acquired the castle. He governed a large swathe of Wales on behalf of the unpopular King Richard III. Like many other nobles, Sir Rhys switched sides when Henry Tudor began his campaign to seize the throne. Sir Rhys was decisive in Henry’s victory at the Battle of Bosworth in 1485 because of his leadership and military skill and because he had gathered many troops from Wales on his way to the battle. 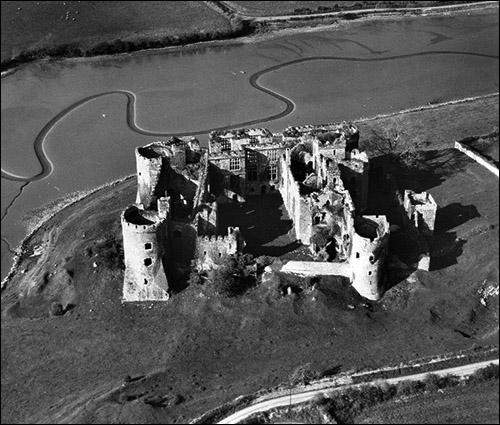 Carew Castle in 1947, courtesy of the RCAHMW and its Coflein website

Having been richly rewarded by newly crowned King Henry VII, Sir Rhys installed lavish facilities at Carew Castle, including a new Lesser Hall. He had stone brought from Bath for decorative effect. In 1507 he held here a five-day Great Tournament, where knights competed at jousting and other sports.

The Castle’s imposing north range, with its Elizabethan window openings, was installed by Sir John Perrot outside the castle’s curtain wall. Sir John, reputedly an illegitimate son of King Henry VIII, was born in Haroldston (west of Haverfordwest) and owned Carew Castle from 1558. He was jailed in the Tower of London and sentenced to death for treason in 1592 but died of ill health that year.

Parts of the Castle were damaged in the Civil War to prevent further military use. Since 1983 it has been leased and managed by Pembrokeshire Coast National Park Authority. In 2013 the Lesser Hall regained its roof.

The aerial photo, courtesy of the Royal Commission on the Ancient & Historical Monuments of Wales, shows the castle in 1947. It is from the Aerofilms Collection of the National Monuments Record of Wales.

Rare species of flora and fauna can be seen in the Castle and grounds. Look out for bats at dusk, including rare greater horseshoe bats.

Carew’s historic Tidal Mill is at the far end of the Millpond.