About 3km out to sea from here lies the wreck of one of the world’s earliest powered submarines. The Resurgam was designed by a clergyman called George William Garrett and built at Birkenhead in 1879. It cost about £1,500, had a compact steam engine and a crew of three. It was 14 metres long. Its Latin name means: “I will rise again.”

Having proved in the Mersey area that the vessel worked, the Rev Garrett set out from Birkenhead for Portsmouth, where he intended to show his invention to the Royal Navy. While passing the North Wales coast, the Resurgam developed a fault and diverted to Rhyl for repairs. Despite rough weather, the submarine continued its journey as soon as possible, leaving Foryd Harbour (the river mouth to the left of the QR codes) under tow on 25 February 1880. The submarine’s crew soon transferred to attend to a mechanical problem on the steam yacht which was towing the Resurgam. Water soon entered through the submarine’s conning tower, the tow rope parted, and the submarine disappeared from view.

The next person to see the submarine – 115 years later – was local diver Keith Hurley, who went to explore the 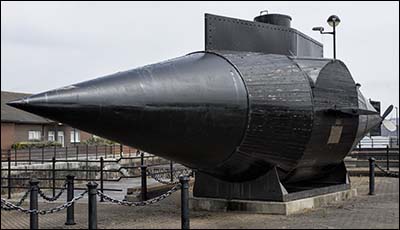 area where a fishing trawler had snagged its net. The vessel was still largely intact, making it the world’s oldest surviving powered submarine.

Some have suggested that the wreck be raised and conserved on shore. This would present technical challenges because the metal has been submerged for so long. A full-size replica (pictured right) is on show at the Woodside ferry terminal in Birkenhead.

George Garrett’s brother Thomas was a Manchester doctor who moved to Conwy and set up a home where children had respite from the polluted city air. For more about Thomas, click here for our page about his grave in Conwy.

With thanks to Sian Grady