Here the Wales Coast Path curves around the perimeter of Llanbedr airfield, built by the RAF in 1940-41. The aerial photo, courtesy of the Welsh Government, shows the site in 1942, with aeroplanes by the runway which runs from top left to bottom right. 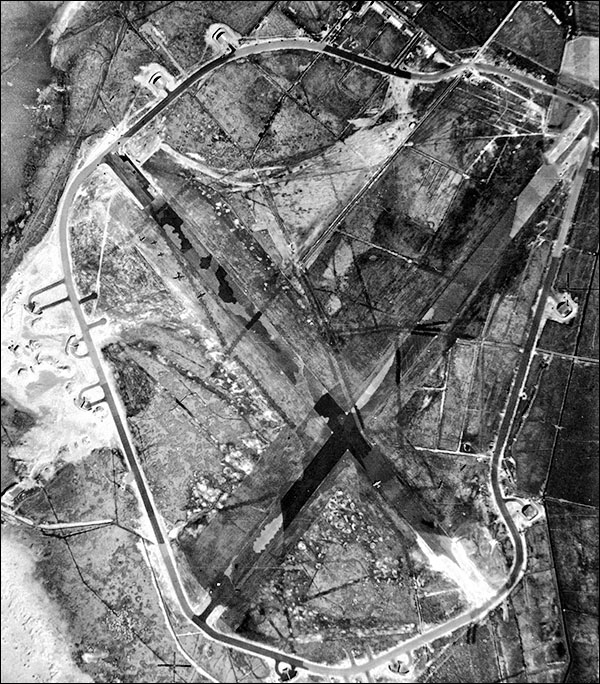 Initially RAF Llanbedr was a base for fighter aircraft, including Spitfires, that patrolled the Irish Sea and protected Allied shipping convoys.

Later in the war, units of the United States Army Air Force (USAAF) used the airfield. They mainly flew Lightning fighter aircraft and practised air-to-air firing above Cardigan Bay – shooting at a target towed behind another plane. One Lightning was forced into an emergency landing on the beach near Harlech. Its wreck is now formally protected – see the footnotes.

As the war progressed, the need for a defensive force here diminished and the base was used solely for armament practice. In the build-up to the invasion of France in 1944, pilots were sent to Llanbedr to bomb practice targets at sea and on ranges at Hell’s Mouth and Penychain, near Pwllheli.

One of several fatal accidents involving Llanbedr planes occurred in September 1941 when an Avro Anson returning to the airfield crashed into the sea off Ynys Enlli (Bardsey Island) with the loss of all five crew. In October 1942 three pilots in Spitfires were practising flying in formation when, in low cloud, they crashed into a mountain near Tywyn. All three died.

After the war, Llanbedr’s isolated position led to it becoming an outstation of the Royal Aircraft Establishment at Farnbourough. It was used for research and development of pilotless drone aircraft. A longer runway was installed, on the north-south axis. The airfield continued in this role, under various name changes, until the early 21st century. Since then, many private pilots have trained here for their licences or to learn advanced skills such as aerobatics.

The remains of a Lockheed P38 Lightning are located near Harlech, submerged by sand except when severe storms occasionally expose part of it. The wreck became known locally as the ‘Maid of Harlech’. In 2019 it was given protected status by the Welsh Government, the first military aircraft to receive such a safeguard. Please do not look for the wreck.

The plane ran out of fuel less than an hour after leaving RAF Llanbedr on a training flight. The pilot, 2nd Lieutenant ‘Fred’ Elliott of North Carolina, crash landed on the beach in 60cm (2ft) of water. He walked away from the stricken plane but died in North Africa a few months later after he was shot down by a German Me109 while on a mission to Bizerte, Tunisia. His body was never found. He is still listed by the American military as ‘Missing in Action’.