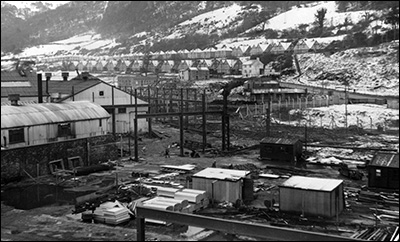 As you look out across the Surf Snowdonia lagoon here, you may find it hard to believe that this site was once home to an aluminium factory which was vital to Britain’s war effort in the 1940s.

The Aluminium Corporation Ltd chose the site in 1906 because the plentiful supply of water from Snowdonia would provide cheap hydro-electricity for the power-hungry conversion of bauxite into aluminium. The complex grew quickly. New reservoirs were created, and a larger power station opened in 1924. Much of the factory was damaged in the flood disaster of November 1925.

The photo, courtesy of the Conwy Archive Service, shows a small area of the factory site. The western end of the surfing lagoon now occupies the foreground. The entrance to Surf Snowdonia is where you can see concrete fenceposts, half way up the photo on the right.

During the Second World War, aluminium from Dolgarrog was needed for RAF aircraft. The factory came under government control in 1940 and round-the-clock shift working was introduced. Concerns about potential enemy sabotage resulted in an anti-aircraft unit being stationed here, while the Home Guard kept watch over the roads. Pill boxes (concrete huts with slits for outgoing gunfire) were erected and decoy houses were painted on the walls of the biggest factory buildings. The village’s real houses, meanwhile, were painted in green, grey and brown camouflage!

The factory eventually became a specialist facility supplying aluminium to the aviation industry. It closed in 2007, with the loss of 170 jobs.

A ceremony here in June 2014 marked the start of work on the Surf Snowdonia complex, the world’s first inland surfing facility. The complex opened on 1 August 2015. Once again, the abundance of freshwater was a key factor in the site’s use. The surfing lagoon, 300 metres long and 110 metres wide, has its water topped up from the outlet of the nearby hydro power station.

The lagoon’s entire water is circulated through particle filtration and ultraviolet disinfection systems every 24 hours, ensuring the water is hygienic for surfers without any chemicals being added. The lagoon is large enough to be classed officially as a reservoir!