Anyone who views this 16th-century century corn mill from the road won’t be surprised to learn that the great painter JMW Turner depicted the building in 1795. Please enjoy the picturesque view of the mill from the road. There is no public access to the grounds. 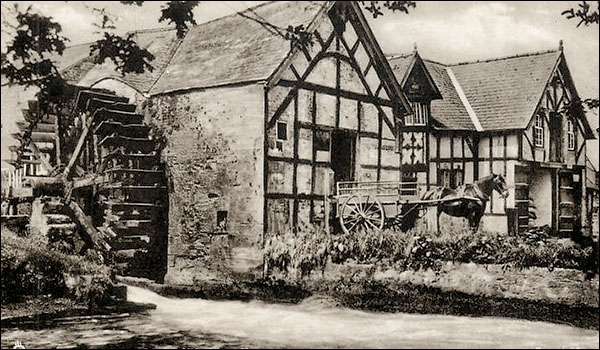 The first mill here was built in 1544 for people in the surrounding villages to mill their grain. Previously they used Marford Mill, which still exists on the opposite side of the road and was owned by the Crown.

The 1544 building was replaced in 1588 with the structure which still houses the mill machinery (on the left as you look from the road). The old postcard photo shows a horse and cart standing outside this section of the building.

The large mill wheel is undershot – powered by water flowing underneath it. This was relatively uncommon in Wales, where hilly terrain usually enabled installation of overshot wheels, which are more efficient.

In 1661 the mill was extended by the addition of what is now the central section. Sir John Trevor, of Trevalyn Hall, had recently become the owner of Rossett and Marford mills. A third extension (on the right) was added in the 1820s.

One of the mill workers drowned here in July 1895, six months after starting to work for miller Thomas Lewis. The millstream was only c.45cm deep at the time Sarah Jane Howell, aged 19, drowned in it. She had suffered from fits since childhood. At her inquest, her mother couldn’t suggest any reason for suicide.

The mill was bought in 1973 by Mike Kilgannon, who restored the building and machinery. He opened the mill to the public at weekends and sold flour milled on the premises. He placed the mill on the market in 2011. New owners bought it in 2013.