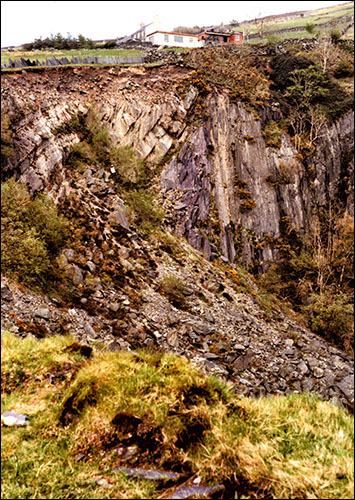 There was once a large gash in the hillside here – a slate quarry known as Chwarel Fawr. The colour photo, courtesy of Gareth Roberts, shows the quarry shortly before it was infilled in the 1970s and the road was straightened. The public footpath which climbs from here runs along what was the quarry’s western edge.

Chwarel Fawr was one of the oldest quarries in the Dinorwig area, possibly operational from the early 18th century. It was working by 1770, according to the autobiography of Griffith Ellis, the manager who greatly increased the scale of the main Dinorwig quarry in the 19th century. He named six men who worked Chwarel Fawr in the early years. They sold the slates to local builders.

Before then, local cottagers would pay the landowner a small fee for the right to extract small quantities of slate in various places, as a sideline to their main means of living. Chwarel Fawr soon dwarfed those earlier workings, which might explain how it got it name – which means “large quarry”. It in turn was eventually dwarfed by the main Dinorwig quarry, a little further south.

Initially, slate from Chwarel Fawr was carried by pack horse, and later down to the shore of Llyn Padarn, where it was loaded onto boats. From c.1808 it was carted to Y Felinheli via Deiniolen. The opening of a raiload in 1825 enabled the slate to travel in railway wagons all the way from Chwarel Fawr and nearby quarries to the dock at Y Felinheli.

As Chwarel Fawr was excavated deeper into the ground, a tunnel was dug for drainage and for a track connecting to the Dinorwic Railway. A second tunnel was dug later, when the quarry floor was lowered again. Above the tunnels, the road looped around the edge of the quarry pit. Waste was tipped on the slope below the road. 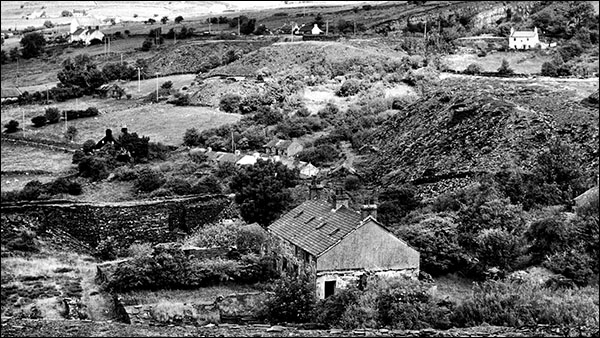 After the opening of the Padarn Railway, alongside Llyn Padarn, in 1843, slate from Chwarel Fawr was hauled upwards to the mills and incline system of the main Dinorwig quarry. This was arduous for the horses and inefficient. A new route with gentler gradients was engineered and a steam locomotive replaced the horses in 1902.

The lower photo shows the view north from near Allt Ddu quarry, with Chwarel Fawr in the top right, waste tips to its left. The stone embankment on the left carried the railway from one of the Chwarel Fawr tunnels, the mouth of which is just visible beyond the nearest waste tip.

With thanks to Gareth Roberts of Menter Fachwen for the photos, taken c.1971 by Gwilym Lloyd Roberts