You are here: Home » Memorials » Pembrokeshire » St Davids: Effigy of Gerald of Wales 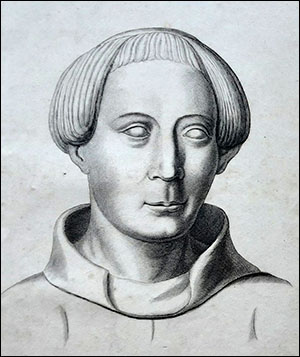 Gerald of Wales (Giraldus Cambrensis) died in 1223 and was reputedly buried at St Davids Cathedral. In the cathedral you can see an effigy which is thought to depict him. He is best known today for his writings, including his detailed description of a journey through Wales in 1188.

The drawings of Gerald and his effigy are from a copy of one of his books published in 1804 and held in the cathedral library. They are reproduced here with permission of the cathedral’s dean and chapter.

Gerald was born in Manorbier c.1146. His father was William de Barri (whose name denoted the family connection with Barry, Glamorgan). His maternal grandmother was Nest, Rhys ap Tewdwr’s daughter. There was more Norman blood than Welsh in his ancestry, but his Welshness damaged his career prospects in an age when Welsh church appointments were made in England.

Gerald was educated by his uncle, who was Bishop of St Davids, and later in Gloucester Abbey and Paris. As a young man, he discovered that the Archdeacon of Brecon was living in sin with a mistress. Gerald had him dismissed immediately and became the new archdeacon!

Gerald was nominated to become Bishop of St Davids when his uncle died in 1176. His campaigning for St Davids to become an archbishopric, independent of Canterbury, may have persuaded King Henry II to choose instead Peter de Leia, an Anglo-Norman from Shropshire. Peter organised the building of much of the current St Davids Cathedral. Gerald was again passed over after Peter’s death in 1198. 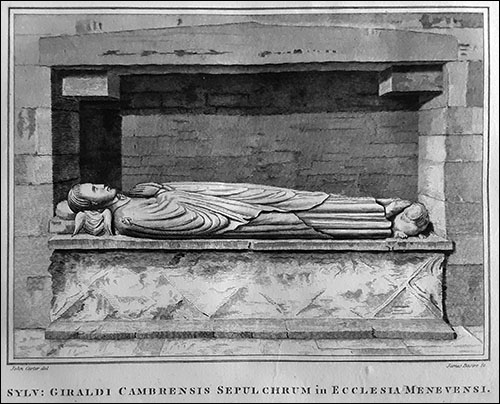 After his first rejection, Gerald became a traveller, lecturer and writer (always in Latin). His first two books described Ireland. In 1188 he accompanied the Archbishop of Canterbury on a journey through Wales to recruit for the third crusade (a military campaign to reclaim Jerusalem for Christians after the city’s capture by Muslim leader Saladin in 1187). Gerald’s record of the trip provides an insight into Wales’ history, topography and people at the time. Gerald himself was the first to sign up on the tour. He set out for the Holy Land in 1189 but only got to central France before he was recalled to Britain by the king.

Gerald continued his campaign for St Davids’ independence from Canterbury, travelling three times to Rome to plead with the Pope. He was briefly imprisoned as a troublemaker. By the early 13th century he had lost most of his supporters in Wales. He spent the last 20 years of his life writing and studying, and making a non-political pilgrimage to Rome.

Click here for the introduction to our tour along the route of Gerald’s 1188 tour of Wales.