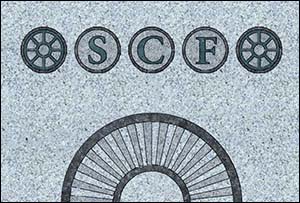 This granite postcard on the prom at Colwyn Bay relates to Sidney Colwyn Foulkes, who designed many of Colwyn Bay’s most beautiful buildings. He was also responsible for cinemas across North Wales during the early decades of film.

Sidney was born in 1884. His grandfather, a builder, developed parts of Rhyl. His father Edward, also a builder, erected the distinctive row of shops along the west side of Station Road in Colwyn Bay.

Edward died when Sidney was 16. Finding himself the family’s main breadwinner, he worked as a joiner and builder in Colwyn Bay. Watching a film in a travelling cinema – in a field near Abergele – inspired him to design his first cinema, the Cosy Cinema in Colwyn Bay. You can read more about this here. 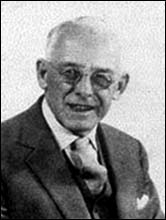 Sidney won a scholarship to the Liverpool School of Architecture, qualifying in 1915. In 1914 he won a contract to design cottage homes at Llandudno Junction. After serving with the Royal Naval Air Service (one of the RAF’s predecessors), he worked in aircraft design before returning to Colwyn Bay to found his own practice.

The postcard here depicts elements of the frontage of 7 Abergele Road, Colwyn Bay, built in 1930. It's a listed building because it's a fine example of Sidney’s Neo-classical style. Just around the corner, on Station Road, is a larger example of his shop design, originally a department store. Click here to see our information and map for this building.

His other projects included buildings at Rydal School, a hospital, Llandudno war memorial, housing estates in Beaumaris and Rhos-on-Sea and landscaping around hydro-electric power stations. In 1956 he was visited by the great American architect Frank Lloyd Wright. He received the OBE and was made a Freeman of the Borough of Colwyn Bay. He died in 1971.

With thanks to Graham Roberts of Colwyn Bay Civic Society