This hotel’s location was chosen for its proximity to the railway station, where most visitors to Harlech arrived. The old photo shows a Great Western Railway train passing the hotel on leaving the station. 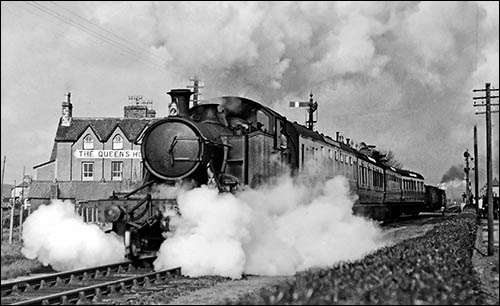 It was built by ship’s captain William Christall and opened in 1878. His wife Jane (pictured below) was the first licensee. William had intended to run the hotel but by 1881 was lodging with other sailors in Liverpool. He suffered mental ill health and died in the asylum in Denbigh in 1884. See the footnotes for more about him.

In 1887 Jane testified in the trial of three Irishmen who had spent a day at the hotel, going out each time a passenger train was due. Police found large amounts of coins on them and suspected pickpocketing. They also found a notebook listing the dates of fairs at a dozen Welsh towns, along with some handwriting in Irish. There were many thefts in Harlech that day but the police couldn’t connect them to the gang, except for the theft of £12 from one passenger. 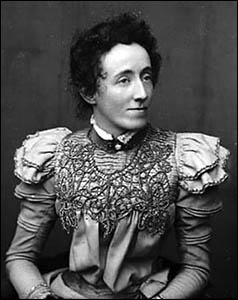 The hotel had a cosmopolitan clientele in January 1916 when 21 sailors were brought here after their ship foundered on Sarn Badrig, a causeway near Harlech, on a voyage from San Francisco to Leith, Scotland. They reached safety in the ship’s lifeboats. There was one black sailor. The crew came from many countries, including Russia, Sweden, Norway, Poland, Wales and America.

In 1958 two future members of The Beatles visited the hotel when a local skiffle group, The Vikings, performed here. Paul McCartney and George Harrison were hitchhiking, and camped near the farmhouse of the Brierley family. John Brierley was a member of The Vikings.

Paul and George returned for a holiday the following year but took a blanket away. Irene Brierley eventually contacted Paul in London and he sent her a £30 cheque. In his letter to her, he wrote: “I well remember the fun we had in Harlech” and sent his best wishes to her boys.

Earlier that century, composers Joseph Holbrooke and Sir Granville Bantock were guests at the hotel. In 1917 Joseph rented Hafodwen in Harlech while composing music based on Mabinogi legends.

In 2019 the building became the Queen’s Bar.

In 1868 William Christall was master of a barque named Castilian. One day his crew got drunk on spirits smuggled aboard in Cuba. There was a fight at the top of a mast between a Dutchman and a Swede, who fell and soon died of his injuries. Later the same year, the ship ran aground near Porthmadog. Three of the crew of 21 died as they made for the shore. In 1869 the ship’s entire cargo of Canadian timber was tied to form three large rafts and towed to Liverpool.

An inquiry found William to blame for the grounding and suspended his captain’s certificate for six months. Some mariners in the Porthmadog area thought this was unjust and the captain had made an error of judgement on a foggy night which no science "could have obviated".

William married Jane Jones Evans, his second wife, in 1869. They kept a hostelry in Aberystwyth before moving to her home area of Harlech.