This has reputedly been a site of Christian worship since the 5th century, when St Garmon may have preached here. Llanarmon means the llan, or walled enclosure, of Garmon.

He was Bishop of Auxerre, France, and was sent to Wales in 429AD at the request of the Celtic Church to combat the heresy of Pelagianism. Pelagius said you could save yourself by your good works and merit, rather than through God’s grace and forgiveness.

This site might have been a holy one even before Christianity. Notice the mound to the left church gate. Some have suggested it’s a prehistoric burial mound and St Garmon stood on it to preach. 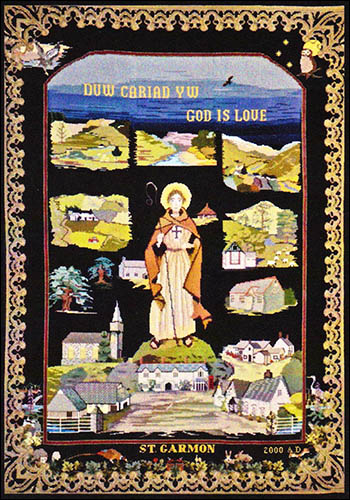 The church is listed (as Capella de Llangarnayan) in church records of 1254. Nothing of that medieval structure survives. When the church was rebuilt in 1846, demolition of its predecessor uncovered more than 100 coins from the reign of King Edward IV in the 15th century. The church bell is dated 1746.

The yew trees near the door are more than 1,000 years old. Under the left-hand one is a gravestone which faced west before it was flattened (for safety). Christian graves normally face east. Was this the grave of someone who had committed a bad deed but was wealthy enough to afford a gravestone?

The church is always open. If the door sticks give it a good push! Inside you’ll see, unusually, two wooden pulpits and pews arranged in boxes rather than rows. On the wall on the left there’s a memorial to the poet John Hughes, bardic name Ceiriog (1832-1887). His birthplace, Pen y Bryn, is c.1km (less than a mile) from the church and features in the millennium tapestry (pictured), which was made by local women and now hangs on the right-hand wall. See the footnotes for details.

This is one of the few churches that still holds a plygain Welsh-language service. It takes place on the Wednesday after Christmas, with unaccompanied choral performances. Traditionally the service was held at churches across Wales on Christmas Day, starting before dawn. The name comes from the Latin for cock crow, pulli cantus.

With thanks to churchwarden Lorna Mills and Clwyd-Powys Archaeological Trust

Footnotes: More on the millennium tapestry

The tapestry is a record of the village and church in 2000. It was stitched over 2.5 years by 10 women from the congregation. Nine pictorial panels are arranged around the figure of St Garmon preaching on the churchyard mound. The border, in the style of the tracery of a church window, depicts plants and wild animals of the area. The tapestry incorporates c.10.5km of two-ply yarn in 179 shades, made by a long-established company in Chiswick.