This memorial commemorates the American airmen who died after their plane got into trouble near here in the Second World War. See below for their details. 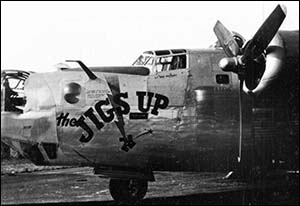 Three were diverted to RAF Valley, south of Holyhead. They included 42-51232 (pictured right), known as “Marker Jig” or “The Jigs Up” because of its call sign. They were placed into a holding formation to await final landing instructions. Shortly after 5.30pm, Marker Jig’s pilot reported that two engines had stopped and he ordered the crew to evacuate. All 10 crew parachuted out. A few minutes later the North Stack Coastguard reported that a plane had crashed into the sea off Holyhead Mountain.

A huge search commenced. Soldiers from Tŷ Croes artillery range joined RAF and American ground crew to search the land. Boats under the command of HMS Bee searched the dark waters. Police were called in from across Anglesey.

Pilot Harold Boehm was found in a field near Holyhead. His co-pilot, Donald Burch, was picked up in Trearddur Bay. There was no sign of the other eight crew members. The wreckage, at the high water mark, burned and was still smouldering at daybreak the next day.

The official investigation concluded the aircraft had run out of fuel and the crew had bailed out without flotation equipment (probably being unaware of RAF Valley’s island location).

The memorial was unveiled in 1993 by Iredell Hutton of North Carolina. He was the regular rear gunner of The Jigs Up. The usual crew had switched to a different plane on 22 December 1944.

The plane’s remains are officially a Protected Place. Two of the propeller blades were recovered from the seabed in 1992. One is displayed on the memorial (which includes the pilot’s name). The other is at Fort Fisher military museum, North Carolina.

With thanks to Adrian Hughes of the Home Front Museum, Llandudno, and to Stephen Hutton, son of Iredell Hutton

The airmen listed on the memorial were members of the 36th Bomb Squadron of the US Eighth Air Force: