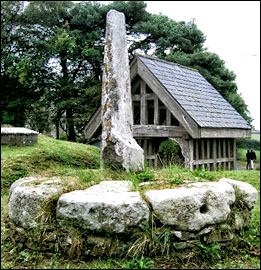 The church sits within what was a triple-banked Bronze Age (2000BC-650BC) hillfort, still partly visible. Until the 14th century it was the centre of a hamlet. Traces of the mediaeval buildings, including the former Manor Court House, are visible in a field close by.

The site may have been venerated before Christians adopted it for open air worship, perhaps at the ancient medieval preaching cross (pictured), now by the path to the church. The name Eglwys, rather than Llan. suggests a very early site of significance. Gymyn means endowed or bequested. The church has been dedicated to St Margaret since the 14th century.

In its north wall is a pointed-arch doorway and small window into a narrow recess. This has been interpreted by some as an anchorite’s cell, where a religious recluse would be shut in to pray and meditate – sometimes on behalf of a local patron.

The interior features remarkable stone barrel vaults and a series of texts painted on the north wall.

Unlike many Victorian restorations, here the work in 1900-01 was remarkably sensitive. It was supported financially by Morgan Jones of Llanmilo and by George Treherne, agent to the Westmead Estate. It drew on the guidance of the Society for the Preservation of Ancient Buildings. The “exceptionally fine” windows produced under the guidance preserve some of the ancient glass and tell of the history and associations of the church.

The unusual wooden structure at the west end of the nave houses a 5th or 6th century memorial stone in Latin and Ogham – an ancient Irish form of writing – to Avitoria daughter of Cunigni, ie of Cymin, after whom the community is named. George discovered the stone in the late 19th century. The Latin inscription reads AVITORIA FILIACVNIGNI, whilst in Ogham strokes can be read AVITTORIGES on the top and INIGINACUNIGNI on the bottom. It translates as ‘of Avittorix daughter of Cunignus’.

The large ‘Peter Williams’ bible was presented to the church by George. Peter Williams was born on Laugharne Marsh and is famous for producing an annotated Welsh bible which meant it escaped protected copyright and so could be published much more cheaply. Inside this one is recorded that it was originally presented by Madam Bridget Bevan (18th-century Laugharne supporter of Griffith Jones’ Circulatory Schools) to her god-daughter. It is ironic that John Evans, vicar here at that time, both ejected Peter Williams as curate and violently opposed Griffith Jones! Pendine’s seafront chapel is a memorial to Peter.

The tall Celtic cross in the churchyard is a memorial to George, made by the firm of W Clarke of Llandaff. It is executed in blue Forest of Dean sandstone. The churchyard also contains several tombstones carved by the stonemason, musician and poet Tom Morris of Morfa Bychan (south of here).

With thanks to Peter Stopp and Prof Dai Thorne, and to Michael Statham, of the Welsh Stone Forum