The Cob and Pen pub was originally called The Dudley Arms Hotel. There are references to it in documents from 1854. The original building was pulled down and replaced by the London & North Western Railway in the late 19th century.

In 1893 an old Rhyl celebrity known as Ally Sloper (after a popular Victorian cartoon-strip character), but whose real name was William E Jones, was found dead in the hotel’s stable yard. He was a painter and paper-hanger, aged 47. Inspector Williams’ opinion was that the body had been dragged from a workshop and left there, but the jury’s verdict was simply “found dead”.

Also in that year the British press had a field day with the case of the “Rhyl Love Tragedy”. Dudley Arms barmaid Edith Hill, 21, was tried for attempting to commit suicide after being rejected by her sweetheart, who had been told to end the relationship by his father. Her solicitor said she was as “chaste as any girl in Rhyl”, and the case was dismissed – to loud applause – because her attempted suicide had not been premeditated.

In 1875 a James Rush of Vale Road was sentenced to six weeks’ hard labour at Mold gaol for stealing three jugs from the Dudley Arms and trying to sell them to another Rhyl pub. 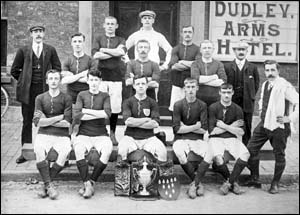 On a lighter note, “smoking concerts” were held here in Victorian times. Women were barred from these popular events, where men would smoke and discuss politics while listening to live music.

The photograph shows members of Rhyl Victoria Football Club outside the Dudley Arms. In 1906 a local newspaper reported on the club’s AGM here, describing how members had a supper to commemorate their success in the second division of the North Wales Coast League. The Dudley Arms had its own bowling green and bowles team in the early 20th century. Sullivan’s boxing booths were at the rear of the building.

The Dudley Arms was later renamed the Load of Mischief. Since 2012, Amanda Phelan and team have brought this old Rhyl pub back to life under the new name The Cob and Pen.