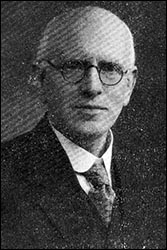 illiams (1877-1956). His father, also called Owen, was a cobbler whose workshop, opposite the village school, was called Birkenhead. The nearest building on the other side of the river Hiraethlyn was, coincidentally, called Liverpool Cottage!

Owen Williams (pictured right) followed his father into the shoemaking business. As his musical reputation grew, children from further and further afield beat a path to the front room of Nant y Glyn for piano lessons. Some came from as far south as Penmachno, others from the prospering town of Colwyn Bay, despite the difficulties of travelling to and from Eglwysbach before it was common for families to own cars.

The video clip (below right) allows you to hear one of Owen’s compositions, a song called Sul y Blodau. It’s a setting of a poem by Eifion Wyn in which his mother sings a lullaby to her dead child Goronwy Wyn (the poet’s brother). It’s performed here by Billy Hughes at the Chubut Eisteddfod in Patagonia, Argentina.

Owen Williams was also organist at Capel Bethania. In 1910, a local newspaper reported that he had “presided at the organ” there during a memorial service for the late King Edward VII, attended by villagers of all denominations.

Before this semi-detached house was built in 1894, a building known as Swan Bach stood on the site. The next building to the north (just before the churchyard) was once a grocer’s shop where children were fascinated by a large hand-propelled bacon slicer.