You are here: Home » Buildings » Monmouthshire » Usk: The Sessions House 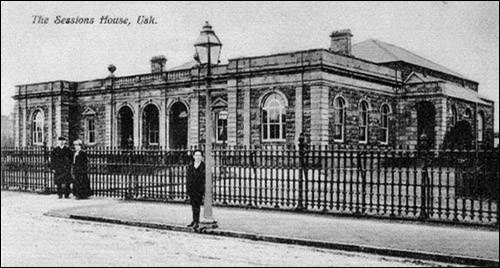 This building is named after its original function, as Monmouthshire’s quarter sessions court. Today it’s home to Usk Town Council.

Quarter sessions were established in medieval times to hear criminal cases which were too serious to be dealt with by magistrates’ courts but not grave enough to require a hearing at the assizes. The quarter sessions were held in each county four times a year (once in each quarter) and also dealt with appeals against sentences passed by lower courts. They were replaced by crown courts in the 1970s.

The Monmouthshire quarter sessions were held in Usk Town Hall, in New Market Street, before the court building opened in 1877. The architect was Thomas Henry Wyatt, who had designed the nearby prison in the 1840s and an extension of St Mary’s Church in Usk.

There were two courts in the Sessions House. A passage enabled officers to take prisoners directly to jail from the dock. 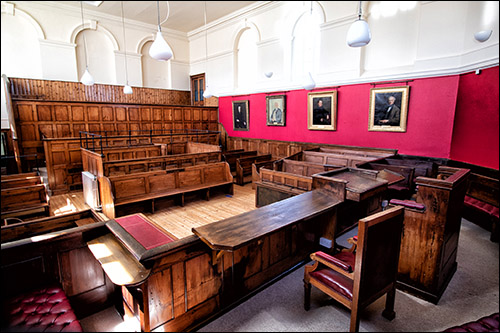 The Western Mail recorded in October 1893, for example, that 14 prisoners would be tried at the Michaelmas quarter sessions, which would also hear one appeal case. Special trains to and from Usk ran as usual on the day of the sessions. One of the prisoners, Henry Collins, was acquitted because there was insufficient evidence to support the charge that he had obtained food and lodging in Pontypool by pretending to be a corporal in the Royal Engineers. As he walked free out of the dock, two policemen clapped handcuffs on him because they had a warrant for his re-arrest on a similar charge.

One of the courtrooms was wrecked by fire in 1944 and remained a ruin until demolition in 1970. The quarter sessions in Usk ceased in 1950, relocating to Newport. The building continued in judicial use because the local magistrates court was here, until 1995.

Usk Town Council took over the building in 1998. In 2011 the surviving courtroom reopened after a £200,000 restoration. Half of the money was raised by local groups, the rest came from the National Lottery and Monmouthshire County Council. Portraits of quarter sessions judges adorn the walls, which are painted in their original red. The interior photo shows the judge’s seat on the right, facing the witness box and lawyers’ bench, with the jury box facing the open space in between.