The stone circle at Swan Meadows may look prehistoric but dates from 1912! It was erected for Gorsedd of Bards ceremonies relating to the National Eisteddfod held at Bailey Park in August 1913. During a ceremony on Friday 8 August, the Gorsedd conferred “honorary degrees” on 12 people.

The Eisteddfod wasn’t an unqualified success. Attendances were much lower than in Wrexham in 1912, and the Eisteddfod made a loss. The antics of suffragettes were another concern for officials, following a high-profile protest at the 1912 Eisteddfod. At dawn on 7 August a “Votes for women” card was found by a burning hayrick near the Eisteddfod pavilion, but the protestors apparently chose to stay away from the festival to avoid “rough handling” and insults from “colliers”.

In 2001 the Gorsedd stones were moved to Swan Meadows from their original position at the Grove, Monmouth Road.

The Gorsedd (“throne”) of Bards was first convened in London in 1792 by Edward Williams, better known as “Iolo Morgannwg”. A poet, political radical and laudanum addict, he forged documents to convince people that figments of his imagination, including the Gorsedd and its “druids”, stemmed from ancient Celtic history. 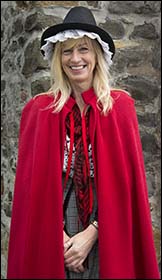 In 1819 he set out a miniature druidic stone circle in Carmarthen for a Gorsedd ceremony coinciding with a regional eisteddfod. Since then the Gorsedd has been closely connected with eisteddfodau, particularly the National Eisteddfod of Wales, where poets, performers and other artists compete each August. Stone circles like this one were established at each town visited by the National Eisteddfod until 2005, when transportable plastic replica stones were introduced to save cost.

One of Iolo Morgannwg’s patrons, Lady Greenly, was a friend of Georgina Waddington of Llanover, near Abergavenny. Georgina’s daughter Augusta (1802-1896) became Lady Llanover and had a major influence on the formation of Welsh traditions in the Victorian era. She effectively invented the “Welsh lady” costume (pictured right), championed the triple harp (as opposed to the Germanic harp which had become popular in Britain) and sponsored eisteddfodau. Her bardic name “Gwenynen Gwent” (the bee of Gwent) reflected her ceaseless promotion of Welsh cultural and academic life.

There is more about her on our page about the canal boat house near her home.