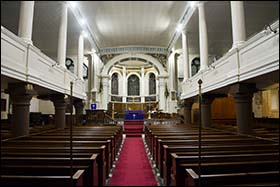 It’s said that this church was founded by St Beuno in the 7th century and dedicated originally to his niece, St Winefride. The first stone church here was erected in the 14th century. Some of that building survives, notably the church tower and the pillars supporting the galleries. Most of the church we see today dates from 1769-70.

The church stands in a hollow below the town of Holywell, which grew and prospered in the 17th, 18th and 19th centuries. This made it difficult for townspeople to hear the church bell ringing, and by 1714 a bell-man would walk the streets with a portable bell to inform them when it was time to go to church. 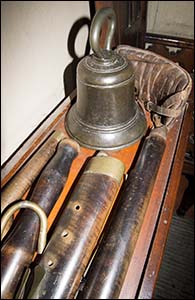 Also inside the church is a bassoon  (pictured left with the bell) dating from 1765, when Wolfgang Amadeus Mozart was a child.

Several stained-glass windows in the church relate to war and peace. Inside the church is a memorial to Paul Panton, who died in 1797, and came from a family of local importance. The memorial was created by the great sculptor John Flaxman (1755-1826). He had a physical deformity and missed out on schooling, spending his formative years in the shop where his father moulded and sold plaster casts. He later created designs for Wedgwood pottery and designed monuments which are in Westminster Abbey and St Paul’s Cathedral.

A mutilated stone effigy in the church is thought to depict a 16th-century vicar of the parish, holding an Elizabethan communion cup. Some people thought it was an effigy of St Winefride and chipped away many areas of the effigy. This apparently continued even after a drawing was made in 1892 showing parts of the right arm which are now missing.