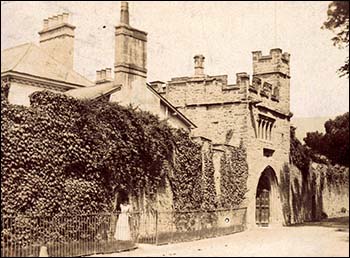 This mansion has been home to many interesting people since it was built in the 1820s on the site of a 15th-century fortified manor house. You can read more about the old manor house on our page about its surviving Gate House.

The Regency mansion was built by retired Royal Navy Commander and local magistrate Edward Seymour, who lived here until 1871. The old photo on the right shows the rear of the building alongside the Gate House.

From 1877 Percy and Caroline Davies lived here. They established the Queen Coffee Tavern, with a public library on the first floor, and left it to the town in 1903.

Porthmawr later belonged to the Solly-Flood family, rooted in Kilkenny, Ireland. Sir Frederick Richard Solly-Flood was a Major-General in the British Army. He was wounded during the “Indian Mutiny”, a rebellion against colonial rule in 1857. He died at Porthmawr in 1909, aged 80.

His son Arthur, who lived at Porthmawr, received the Distinguished Service Order in the South African (Boer) War and took part in the Battle of Mons, Britain’s first large battle of the First World War. In 1916 he married Elise Martin of Abergavenny, whose first husband had died in the war in 1915. 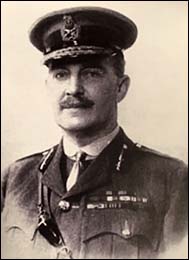 1917 Arthur (pictured left, courtesy of Crickhowell District Archive Centre) was appointed Brigadier-general on the staff of Sir Douglas Haig, commander of the British army on the Western Front. Later that year, Arthur was promoted to Major-General and became commander of the 42nd Infantry Division. Honours he received during the war included several from Belgium and France. He died in 1940 and is buried nearby in St Edmund’s Churchyard.

Rudolf Hess, Adolf Hitler’s deputy, was held at Porthmawr for a short while during the Second World War, after his defection from Germany in 1941. There's more about him on our page about the Angel Hotel in Abergavenny, where he sometimes took refreshment.

In 1954 Porthmawr became the home of Dr Joe Morgan, a great believer in homeopathic medicine. He would dispense herbal cures alongside his normal prescriptions. He was often heard on BBC radio, giving talks on homeopathy. Many of the herbs and plants in his garden were grown for medicinal purposes.

For about 10 years up to 1998, Dr Roger Langmaid lived at Porthmawr. In the 1960s he had worked at American corporations including IBM, developing magnetic recording systems for computers, video recorders and other equipment.

Today Porthmawr Country House is a venue for group accommodation, weddings and other functions.

With thanks to Geoff Powell and to Crickhowell District Archive Centre