Now home to the Bentley home interiors and coffee shop, this is one of the few surviving buildings in Brecon from around the time of cartographer John Speed. His 1611 map shows houses lining “Shepe Stret” (which meant "Sheep Street"). 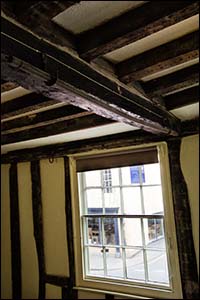 The building is dwarfed by its later neighbours, although the steep roof does its best to compete! The building was built as a cottage, in the 17th century or possibly in the 16th century – when Brecon enjoyed prosperity and growth during the Tudor dynasty. The upper storey projects forward over the shopfront, which was added in the 19th century.

The building’s original frontage has a timber frame, with the spaces between the framework filled with rubble. The frame is clearly visible inside the first-floor room, where you can also see various antique nails and hooks. The café area at the back occupies the site of a former stable, where a horse and cart were once kept.