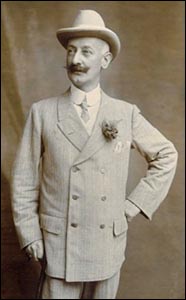 This house was once home to Irvine Blennerhassett, a pillar of the local community until he was found to be a fraudster. He fled to the far side of Canada but was tracked down and imprisoned. The house is private property – please enjoy the view from the pavement but don’t enter the garden.

Blennerhassett (pictured right) was born into a doctor’s family in 1863. He became a Welsh speaker after moving to Wales from County Kerry in Ireland. In 1881 he was a Classics teacher, living with his widowed mother and brother in Llanfairfechan, on the North Wales coast.

Settling in Crickhowell, he became a popular character. He married his next door neighbour and they had four children. He played for the town’s newly formed rugby club, where he also held senior posts. He qualified as a Welsh Rugby Union referee in 1902, and also played billiards and cricket. In 1901 he was manager of the Greyhound Hotel, Abergavenny. He became well known in Newport and Cardiff as an auctioneer and accountant.

Next door to Clarence Villas is the Clarence Hall, built in 1890 as a public hall. Blennerhassett was secretary of the committee which raised funds and built the hall. He was living at 1 Clarence Villas when the 1911 census was taken.

As clerk to Crickhowell Rural District Council and to the Board of Guardians for Llangattock workhouse, he handled the accounts for both. He was rumbled after an unannounced audit in 1912 found that he had defrauded them of c.£550, which would more than £50,000 in today’s money. He disappeared before police could arrest him, sparking a frenzy of speculation locally and in the press.

In May 1913 a man called “Joe Benson” was arrested in British Columbia, where he worked as steward and accountant for the Canadian Pacific Railway’s Mount Stephen Hotel. Two policemen were despatched from the Crickhowell area to western Canada and identified the suspect as Irvine Blennerhassett.

He was in poor health when he appeared in court in Brecon to admit all of the charges against him, which were: forging and altering cheques; forging minute books; embezzlement; larceny; and falsification of accounts. He was sent to Parkhurst prison, Isle of Wight. On his release he married a widow from Abergavenny and lived on the island as “Irvine Benson”. He died at a nursing home in Sandown in 1919.

With thanks to Maldwyn Powell, of Crickhowell & District History Society, and to Bill Jehan and Geraldine Pardoe

More about Irvine Blennerhassett on the history society’s website