The jagged pinnacle which rises near the entrance to Dinorwig’s underground power station was a nuisance when this area was being quarried. It was known as Y Ceiliog Mawr (the big cockerel) and survived several attempts to destroy it. If you're viewing it from the footpath through the quarry, please do not cross the fence. 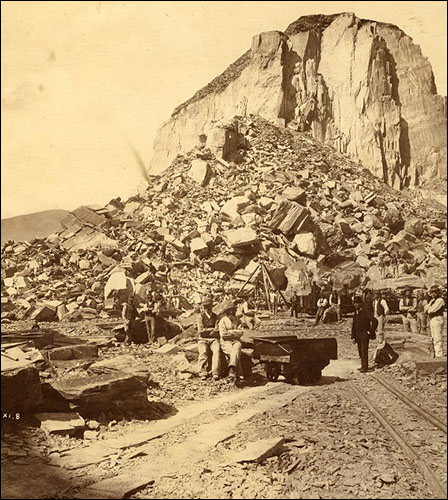 The Ceiliog Mawr pinnacle after being blasted
© Gwynedd Archives Service

The pinnacle is formed of dolerite, a hard volcanic rock – see footnotes for details. Slate quarrymen excavated the surrounding ground, exposing increasingly high cliffs. The Ceiliog was a hazardous obstruction between the Wellington and Victoria areas of the quarry. The quarry’s specialist abseilers inspected it regularly for signs of loose rock. Rockfalls were the biggest cause of death in Dinorwig quarry.

A large explosion to reduce the Ceiliog was prepared in 1887. The chief constable of Caernarvonshire warned Llanberis residents to go outside their houses at the appointed time, leaving their doors and windows open, as a powerful pressure wave was expected from the blast.

Six years later Mrs Assheton Smith, the quarry owner’s wife, lit the fuse for another assault, detonating explosives packed into 11 specially excavated shafts. The Ceilog’s height before the blast was estimated at over 80 metres (270ft).

In 1896 Lord Penrhyn and Lord Mostyn were among the guests invited to watch the Ceiliog’s demolition, using explosives from the Nobel company. The feeble result disappointed the large crowd and probably reminded Lord Mostyn of a similar end to his grand explosion at the Little Orme limestone quarry in 1891. Lord Penrhyn’s men had successfully brought down a pinnacle of hard volcanic rock at Penrhyn slate quarry in 1895.

After two further blasts in 1905, hundreds of quarrymen were unable to work on nearby galleries while the Ceiliog was made safe. It was reported that some “excellent slates” had been exposed where the “graig ddrwg” (bad rock) was removed.

The area was remodelled for the power station’s construction in the 1970s. This included filling in, with excavated rock, the Hafod Owen part of the quarry – a deep crater between the Ceiliog and the New York level. Hafod Owen’s engine house is preserved at Gilfach Ddu.

Thanks to Dr Jana Horak, of the Welsh Stone Forum

A dyke – a thin tabular sheet – of dolerite crosses the land, roughly east-west, but is exposed only at the pinnacle. It was formed by volcanic eruption in the Ordovician age, making it younger than the sediments which formed the slate here. Dolerite has the same composition as the more familiar basalt but cooled within the upper layers of the Earth rather than at the surface. The quality of the slate was probably better around the pinnacle as the dyke would have imparted heat to the sediment as it intruded, affecting the original minerals in the sediments.