Why does this former industrial building have a wedge shape and curved wall? There’s a clue in the 1950 aerial photo (courtesy of the Welsh Government), showing a pair of railway tracks curving around the building to reach Atlantic Wharf. 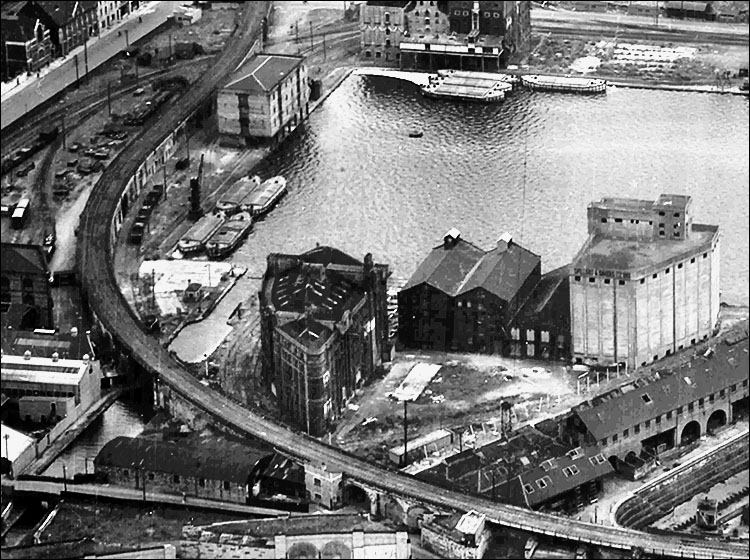 The building was erected for milling company Spillers & Bakers Ltd in the 1890s, amid a spaghetti of railway tracks serving the Bute West and Bute East docks. The Bute Dock authorities leased to Spillers & Bakers a wedge-shaped plot of land between railways for the new building. The company was also granted the use of pre-existing warehouses nearby (now demolished). It continued to use warehouses at the west dock (now filled in).

The picture shows how the Bute Viaduct passed the western end of the building we see here today, for trains from the Valleys to reach elevated tippers where coal was dropped directly into ships. On the far left is the LNWR goods warehouse (now an hotel).

There was a also a low-level system of tracks for wagons to reach quays for other goods. Here they formed almost a triangle around the area leased to Spillers & Bakers.

The company imported wheat, oats and other grain. Its large mills in Cardiff and other ports produced flour, some of which was dispatched by ship. The company had ships of its own. It also produced Victoria Dog Biscuits. Its chairman was Arthur Baker, a Taff Vale Railway director and son of a Bristol corn merchant. It’s a coincidence that Spillers & Bakers supplied flour to bakers!

One of its employees, Michael Keens, was buried by a fall of wheat in 1902 as he worked in a corn bin. Colleagues rushed to pull him out but he died of suffocation.

To the left of the Spillers building in the photo is the Junction Canal, which Schooner Way now crosses over. The canal connected the two Bute docks and continued westwards to the Glamorganshire Canal. Its surviving eastern section is part of the dock feeder canal, which conveys water from the river Taff at Blackweir through Bute Park and the city centre to replenish the dock.

The Spillers building was converted to residential apartments in the 1980s.