The railway through Ferryside was engineered by Isambard Kingdom Brunel and opened by the South Wales Railway in 1852. The station was near the western terminal of the ferry crossing to Llansteffan. The Edwardian photo shows a train on the shoreline embankment south of the station. 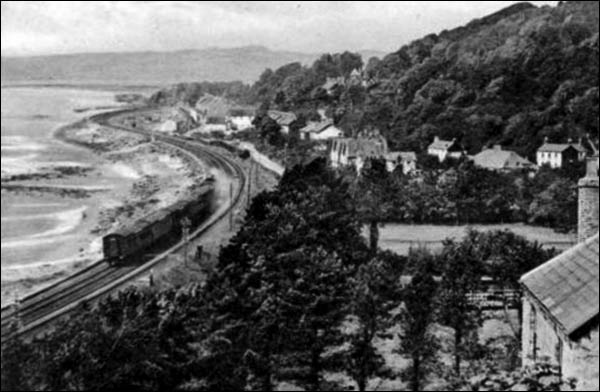 Few machines were available for building railways, and hundreds of labourers from other parts of the British Isles were employed between Carmarthen and Kidwelly. Most were paid at Ferryside on alternate Saturday nights.

In December 1851 violence flared between workers from Great Britain and from Ireland. The unrest began on a pay night when Thomas Evans, landlord of the Mariner’s Inn at Ferryside, ejected two labourers at 11.30pm. They forced the door open and attacked Thomas’ wife. Thomas and two workers who intervened were stabbed in the face or neck. The resulting melee involved about 100 men.

Two days later, c.250 English and Welsh workmen went to the construction works near Coed (north of Ferryside) and forced c.100 Irishmen to stop work. A mob later went to the St Ishmaels home of Irishman Michael O’Brian, who had been involved in the Mariner’s Inn fracas. He was not at home. The mob forced his wife out and set fire to the cottage, which was destroyed.

The South Wales Railway merged into the Great Western Railway in 1863. The 1880s signal box at the south end of the station is listed as the best surviving example of a GWR Type 3 signal box. The station platform by the signal box was raised and widened in 1908 as part of an upgrade to speed up “boat trains” from London to the recently opened port at Fishguard.

There was a goods siding north of the station. In the last three months of 1915 alone, 931 tonnes of cockles were dispatched from Ferryside. The photo of donkeys carrying cockles at Ferryside dates from before the First World War.