This building, now home to Neath Town Council, was once a café run by Italians who had settled in Wales. One of them, Ernesto Moruzzi, drowned during the Second World War while being deported because of his Italian ancestry. The C in MC refers to the Colombotti family. 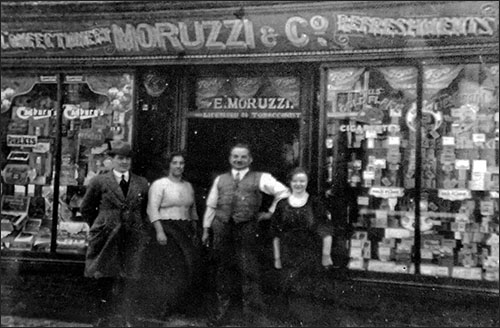 Ernesto (pictured below) and his wife Maria moved to Wales c.1910 from Bardi, Italy. Initially they ran a tobacconist’s shop in Ogmore Vale, pictured right c.1920. Later they established the Cosy Café in Windsor Road, Neath, and the MC Café, here in Orchard Street. They had three sons.

Ernesto was arrested soon after Italy declared in June 1940 that it would fight alongside Germany in the Second World War. The UK authorities feared that Italian civilians in Britain could secretly help the enemy. Many Italian men were quickly interned.

Soon after his arrest, Ernesto was one of 1,200 Italian and German internees and prisoners of war who left Liverpool on the cruise liner Arandora Star, bound for Canada. Also on board were the ship’s regular crew and 400 troops to guard the prisoners. 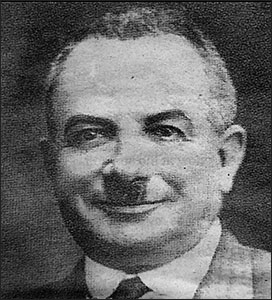 The ship had only reached the north-west coast of Ireland when it was sunk by a U-boat on 2 July 1940. More than 800 of the people on board perished, including Ernesto. His body, clad in a lifejacket, later washed ashore at Cloughglass, near Burtonport, County Donegal. He was given a Roman Catholic burial locally.

The building was erected in 1930, according to the plaque at the top of the frontage. It had various uses before becoming Neath Community Centre and the offices of the town council.

With thanks to Paul Moruzzi