Remains of a prehistoric forest are sometimes exposed on Amroth beach after storms have removed sand. The forest was submerged when ocean levels rose, more than 5,000 years ago. 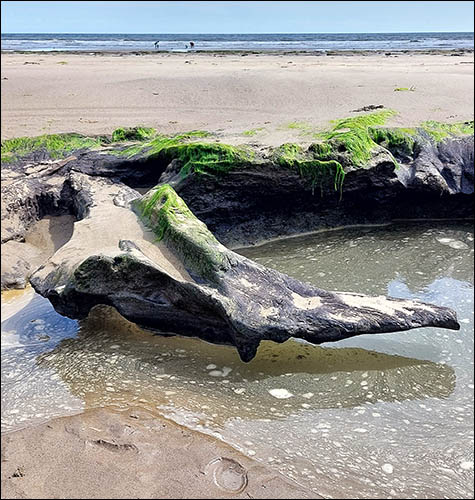 The ancient wood is soft, spongy and waterlogged. The fibres are plain to see. Sometimes nuts, acorns and paper-thin leaves are exposed. Many acorns were found when the promenade was built in the 1950s.

Prehistoric plants also formed Amroth’s seam of anthracite, a hard type of coal. The seam was mined at various places, especially in Colby, and is visible in the cliffs west of Amroth. The rock formation began 315 million years ago.

Coal is also clearly visible at the eastern side of the stream by The New Inn. Between there and Telpyn is Black Rock, where coal can be found on the shoreline. In that vicinity were Blackthorn Caves until a storm in 1896 destroyed what remained of them. This left an arch of rock which became known as Black Hall, but the last section was demolished by storms in the 1920s – see the footnotes for a poem about its loss.

The local community has prospered from the resources offered by the sea and shoreline, while also having to adjust when the sea changes the coastline, especially during wild winter storms. New stones, groynes and sea defences were put in place in the 1950s after Exercise Jantzen had accelerated the beach’s natural movement eastwards. Some of the groyne stanchions were rails lifted in 1952 from the Maenclochog Railway.

Seabass are among the abundant fish off Amroth. In 2018 a seabass sculpture called Bertie was unveiled on the seafront, near the Amroth Arms. It was designed by local sculptor Gideon Petersen and made of stainless steel filled with recycled plastic bottles, collected by local schoolchildren. It was commissioned by Amroth Community Council and Saundersfoot Community Council as part of the ‘Turn the Tide on Plastic’ project. Amroth council’s logo was redesigned in 2020 to include a seabass.

Since 2004 the shoreline at Amroth is part of the Carmarthen Bay and Estuaries Designated Special Area of Conservation, affording monitoring and protection of this special seascape.

With thanks to Mark Harvey

This poem by Dick Thomas, who lived in Amroth, was published in the Narberth Weekly News in 1926.

Historic Arch, alas, no more, hit hard by frost, by waves and storm,
Bright beauty spot on Amroth's shore, now battered, shapeless, rent and torn.
Old Neptune with terrific blows egged on by heartless Father Time,
Devoid of love, no mercy shows on mortal, landmark, arch or shrine.
To stately Arch we bid adieu, in minor strain its loss deplore.
For ever gone from human view, must now be classed with things of yore.
About two hundred years ago John Wesley passed on horse this way.
We think the saint with mind aglow beheld this Arch and blessed the day.
Here Nelson gazed with pleasing eye, the antiquarian plied his pen.
The submerged forest green and dry grew food for prehistoric men.
Near by its base a thinker sat to write in book its hoary age,
"Two hundred years," instead of that please write ten thousand on its page.
Dear Editor of "Narberth News", keen lover of historic lore,
Insert these lines, imprint these views, and mourn with me for Amroth shore.