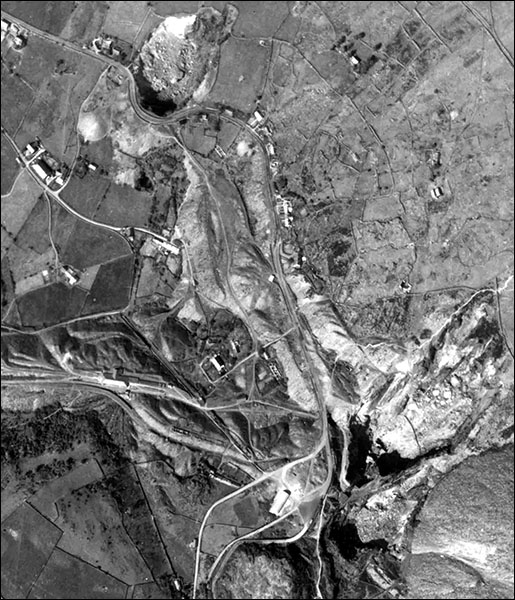 From the road here you can see some of the upper workings of one of the earliest slate quarries in the Dinorwig area. The grassed level expanse is where the lower workings were infilled in the 1970s, when the area each side of the road was landscaped.

The 1946 aerial photo, courtesy of the Welsh Government, shows the nearby Chwarel Fawr at the top. The two large shadows in the bottom right denote the twin pits of Allt Ddu quarry.

It’s thought that quarrying started in the Allt Ddu area from c.1700. Allt Ddu quarry developed as two pits either side of a ridge of rock which was retained because it supported a stream. Old maps mark the watercourse as an “aqueduct”. Short tunnels through the ridge connected the two pits.

As the quarrymen followed the slate vein deeper into the ground, a railway tunnel was dug to allow the slate to be removed without having to be hauled up from the quarry floor first. The tunnel was more than 200 metres long and ran north-westwards to a complex of inclines and mills, where slate from Chwarel Fawr was also processed.

From 1825, roofing slates from this area were conveyed to the sea at Y Felinheli by the horse-worked Dinorwic Railway. After the lower-level Padarn Railway opened in 1843, Allt Ddu slate was carried up the “village tramway” (formerly the southern end of the Dinorwic Railway) to the main mills of the Dinorwig quarry and then to down to the lakeside. 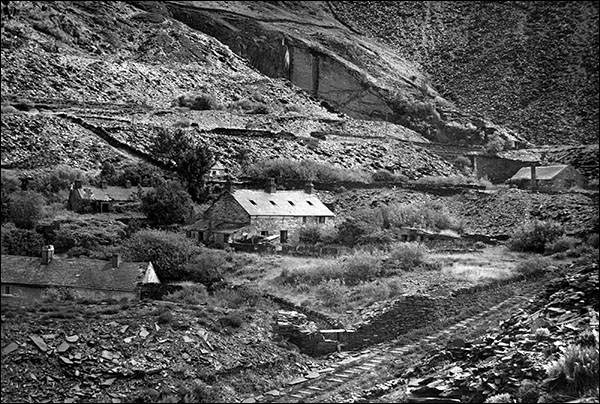 Before a steam locomotive replaced horses on this duty in 1902, a new route with gentler gradients was built from Chwarel Fawr to the mills via Allt Ddu quarry. On both sides of the road here there was a spaghetti of narrow-gauge railways and trackways, interspersed with tips of waste rock.

The lower photo, taken c.1971 by Gwilym Lloyd Roberts, shows the top of the quarry (upper part of photo). In the bottom right are sleepers of a dismantled railway. In the upper right corner is part of the vast slope of waste deposited from the Garret department of Dinorwig quarry (beyond the shoulder of the mountain).