In 1899 a goods train crashed into the sea here, killing the driver and fireman. Franz Emil Krause produced this dramatic painting of the wreckage under a stormy sky. If you’ve just scanned the QR codes, notice the low bridge under the railway here which was built to maintain an ancient drovers’ route to the beach. Livestock was driven around the headland at low tide. 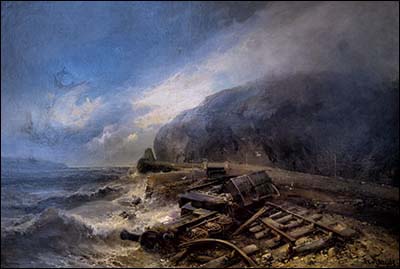 Mr Krause was born in Lower Saxony in 1836. He was living in Gyffin, Conwy, when he died in 1900, leaving a widow and five offspring. Latterly he was known as Francis E Krause. The oil painting of the wrecked train is in Conwy Guildhall, and is reproduced here by kind permission of Conwy Town Council.

Beyond the wreckage is the bridge which still carries the road (now the eastbound A55 carriageway) over the railway where the tracks emerge from Penmaenbach tunnel.

The accident happened on 12 January 1899, as a storm lashed the coast. At about 10.20pm a passenger train from Chester, well filled with people, passed Penmaenbach without incident.

Later platelayers (track maintenance men) noticed that the sea had washed away c.60 metres of the railway. One of them immediately began to walk towards Conwy with a red lamp to warn any approaching trains. He had not reached the end of the tunnel when a goods train from Manchester approached him, at around 11pm. The driver made no brake application and the locomotive and leading trucks toppled into the sea.

The bodies of driver Edward Evans, 45, and fireman Owen Edward Jones, 25, were washed out to sea. The former was discovered soon afterwards, the latter near Deganwy almost two months later. Mr Jones (whose job was to maintain the locomotive’s fire) had worked for the London & North Western Railway for 10 years. His watch had stopped at 10.55pm. Both men lived in Holyhead.

The company’s priority after the event was to rebuild the missing section of railway, slightly further south. One of the new tracks was ready the morning after the accident, enabling the Irish Mail train (Holyhead-London) to pass in both directions. The second track was opened later that day.