This remote church, no longer used for worship, is thought to be on an early Christian site. It contains a stone from the 5th or 6th century inscribed with Latin words. You can walk across the field to the church but please keep the churchyard gate closed. 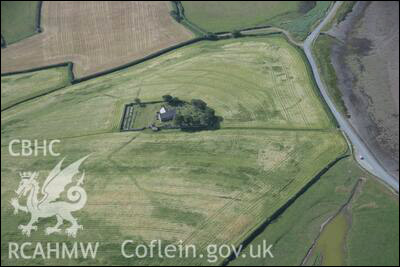 Aerial survey photo from 2005. The darker
lines in the fields denote prehistoric ditches.
Courtesy of the RCAHMW and its Coflein website

Evidence of a late-prehistoric settlement here was uncovered in the dry summer of 2005. Aerial surveys by the Royal Commission on the Ancient and Historic Monuments of Wales showed lines where barley had ripened at a different rate because ditches were dug there in prehistoric times to create enclosures. One line corresponds with the original boundary of the church cemetery (later enlarged). Some enclosures radiate from the churchyard.

The stone church, listed Grade 1, was built in the 14th century and enlarged later. The Victorians didn’t rebuild it, leaving it as a fine record of earlier church architecture. Notable features are the window-less nave and the 18th-century interior fittings.

Two stones carved with crosses in the 13th or early 14th century form the top and sill of an opening in the north porch (which was built much later). They may have been gravestones. The sill also features a carving of a boat with raised bow and stern, possibly added after the stone became the sill.

The church is dedicated to St Baglan, who is thought to have lived in the 6th century. He became abbot of Ynys Enlli (Bardsey island).

The church fell out of use after places of worship were built in more convenient locations. There was only one Sunday service per year here by the early 20th century. Volunteers from the Friends of Friendless Churches now maintain the building.

In 2017 Lord Snowdon was buried in the family plot here. He was a renowned photographer of celebrities and married Princess Margaret, sister of Queen Elizabeth II. His family owned Plas Dinas, near Bontnewydd.

More about the church – Friends of Friendless Churches website