The footpath between Y Fron and the eastern end of the former Cilgwyn slate quarry is mostly on an embankment of the quarry’s narrow-gauge railway system. The embankment was a tip for waste rock in the 1880s. Earlier waste was tipped onto the hillside south of the quarry, but space was constrained. 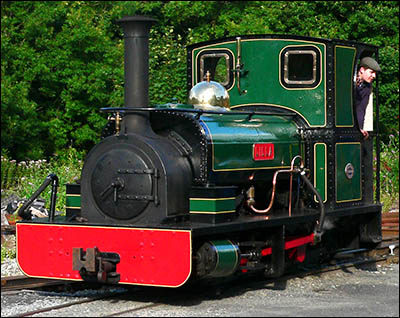 The new tip was gradually extended as more rock was dumped. Eventually it formed the route of a railway which snaked across the fields in an S-bend as it climbed. A more direct route would have been too steep for the quarry’s steam locomotives.

In the 1890s the railway reached a triangular parcel of land south of Bryn-hyfryd Terrace which was available for tipping waste rock. You can see the waste today, north of the road from Y Fron to Carmel. According to local historian Dafydd Glyn Jones, it was known as “Domen Shibby” after a quarry supervisor whose forenames had the initials CB (pronounced “Shibby” by quarrymen).

The line was redundant when the tipping site was full but got a new lease of life in 1923, when it was rebuilt to provide a new route from the quarry for finished slate. Previously the slate was lowered on an incline from the quarry to the Nantlle Railway near Talysarn.

The rebuilt line here connected to the railway tracks which led to the long incline east of Bryngwyn. The incline enabled slate from various quarries around Y Fron to be transported on the North Wales Narrow Gauge Railway to Dinas station, where it was transferred to main-line railway wagons.

Steam locomotives at Cilgwyn quarry included Lilla, built in 1891 and preserved on the Ffestiniog Railway (see the photo by Gwion Clark). It may have taken waste for tipping here as the embankment grew. For the completed railway, the quarry bought a more powerful loco in 1897 and named it Jubilee 1897, celebrating 60 years since Queen Victoria was crowned. This loco is also preserved.

Some of the many accidents in the quarry involved the rail system. In 1909 quarry stonemason John Jones, 54, of Groeslon walked past a wagon and started to cross the adjacent track, not noticing an approaching locomotive. He was knocked down and died of his injuries a few hours later.

With thanks to Dr Dafydd Gwyn and Gwion Clark. Sources include ‘Gazeteer of Slate Quarrying in Wales’ by Alun John Richards, Llygad Gwalch 2007