It was on this site that Ifor Parry – known as ‘Rovi the Welsh Wizard’ – worked as a printer. His magic tricks with cards took him around the world, enabling people of many nationalities to experience his unique brand of entertainment. 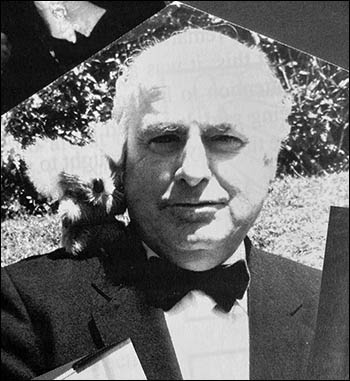 Ifor was born in 1919 at the family home: 7 Thomas Street, Caernarfon. At the age of 15, he started his apprenticeship with the Caernarfon and Denbigh Herald – click here to read about the newspaper’s history at this site. He remained with the Herald all his working life, leaving only to serve in the Royal Corps of Signals during the Second World War. During the war, he often entertained his comrades with card magic.

While serving in Northern Ireland he met his wife to be, Minnie. They settled in Caernarfon at the end of the war. It was Minnie who created his stage name by reversing his name (in English spelling). In 1984 they made the perfect President and Lady for the British Ring of the International Brotherhood of Magicians.

In the same year, Rovi was the first Welsh magician to receive an Honorary Ovate from the National Eisteddfod, one of Wales’ highest honours. His bardic name at the Gorsedd of Bards was Rofi.

He was Honorary Life President of the North Wales Magic Circle and a Gold Star member of the Inner Magic Circle. American magician and actor Channing Pollock publicly knighted him as ‘The King of Cards’ at The Magic Circle.

Rovi died in 1996. He is fondly remembered by magicians and local people alike for his humour, charm and kindness. Each year the Rovi Trophy is awarded for the best card trick at the IBM British Ring Convention.

With thanks to Hilary Jones