South of the track through Cwmorthin stand the walls of a Calvinistic Methodist chapel. It was built on an isolated plot of land for workers from nearby slate quarries.

The chapel was sometimes known as Capel y Gorlan. Gorlan is Welsh for ‘sheepfold’ (an enclosure where sheep were temporarily kept). The chapel was connected with Capel Bethel in Tanygrisiau. 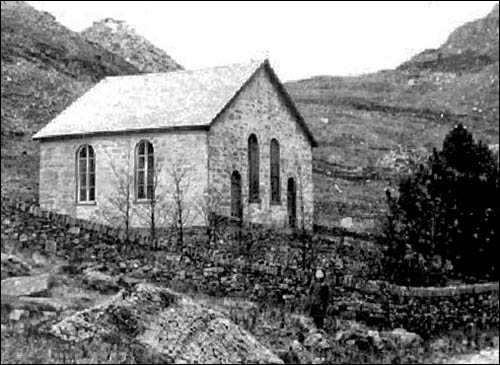 From 1855 Methodists had met for worship at Cwmorthin Uchaf, the farmstead whose ruins you can see across the valley from here. The ruined chapel began as a Sunday School for that congregation but was also used for services from 1867. The Methodists leased the plot from John Ralph Ormsby Gore, owner of Rhosydd quarry.

Much of the impetus for building the chapel came from Thomas Jones, the quarry’s overseer. He lived at Plas Cwmorthin and was a skilled orator and leader. To ensure that no chapel service was cancelled or delayed, he would send a servant and horse down the valley each Sunday to carry that week’s preacher to the chapel.

Rhosydd quarry closed in 1930 and the chapel was disused before the Second World War. Since then, generations of photographers have been drawn to its evocative ruins, recording the gradual loss of the slate roof, beams and rear wall. Works were undertaken in the 21st century to arrest the decay of the remaining walls.

The ruins of an Independent chapel can be seen lower down the valley, near the remains of Cwmorthin Terrace.

Slates from Rhosydd quarry were carted along the track here, before a railway was built to take them to Croesor.

In 1875 a narrow-gauge railway was laid alongside the cart track to take slate from Conglog quarry to the Ffestiniog Railway via the Cwmorthin quarry railway (at the lower end of the lake). Some of the Conglog railway track survives under the soil and vegetation – you may spot an exposed section as you walk. The railway took a slightly lower course than the cart track between the chapel and the nearby gate.

With thanks to Mel Thomas and Rhian Williams