This riverside path was known as Fortune’s Frolic by January 1844, when it was improved by 40 to 50 unemployed labourers. The old picture, shown here courtesy of the National Library of Wales, dates from around that time and is captioned as a view from Fortune’s Frolic. The path is in the bottom right. 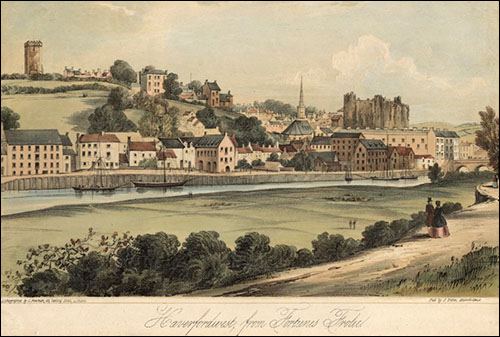 The path leads to the village of Uzmaston, which means the 'settlement of Osmund'. Osmund is a personal name probably introduced by English, Anglo-Norman or Flemish settlers in the 12th century.

According to local legend, a gentleman named Samuel Fortune was discovered in a compromising situation with a young woman on the path in the late 18th century. He was challenged to a duel in which he died.

Soon after this, a farce called Fortune’s Frolic was popular in British theatres. Local wags may have applied the name to the path in reference to Samuel’s illicit activity here. The first word in the name was commonly omitted by 1853, when the local press reported on construction of the railway near “the Frolic”.

The first steamship to reach Haverfordwest, in 1830, was named the Frolic. It was newly built for the Pembrokeshire to Bristol run.

The 1887 Ordnance Survey map names Fortune’s Frolic and shows the town’s gasworks in the triangle of land south of where the path goes under the railway. Gas produced by burning coal distributed in pipes to illuminate the town. The map notes Higgons’ Well further south. Higgon was another local surname in the 18th century.

The Haverfordwest Regatta took place on the river below Higgons’ Well in Victorian times. Spectators massed along the Frolic to watch the races.

The Frolic was “invaded” by rats in August 1899, when unusually high tides flooded their riverbank homes. Some people enjoyed observing the rodents but when local “terrier men” brought their dogs, the “slaughter became fast and furious”. Almost 100 rats were killed in one night, and dozens on other nights.

John Henry Thomas, aged 12, drowned near the gasworks quay (‘Gas Quay’) in 1904. He and two friends had often bathed there but couldn’t swim. Gasworks men searched for the child. Pupil-teacher Lewis Gibbon (coincidentally John’s teacher) joined the search and found the body. The coroner at John’s inquest said schools should teach swimming instead of singing.

In 1908 Joseph Reilly, 42, drowned after the ketch on which he worked as a cook ran aground by the Frolic. A non-swimmer, he fell into the water while trying to get into a rescue boat.