This building incorporates a centuries-old farmhouse. The photo of the inn c.1860 is shown here courtesy of Llyfrgell Genedlaethol Cymru – the National Library of Wales. Notice how the section on the left was further back from the road than today’s frontage. The building was enlarged in the 1930s. 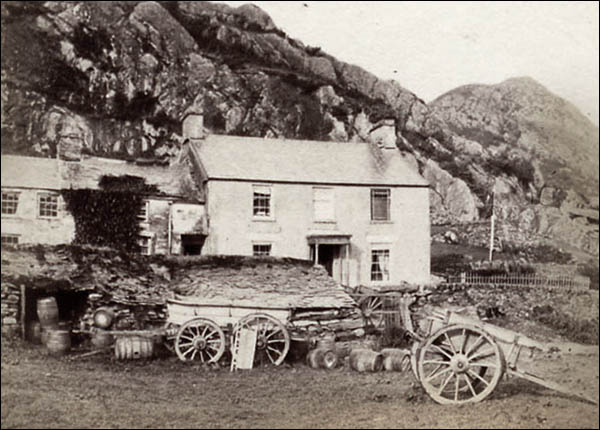 The farm here was known as Ffridd (or Ffrith) Bryntyrch. Ffridd denotes upland pasture or recently cleared land. The farm was recorded in a 1352 survey for Edward the Black Prince, who owned the farm and leased it to the chamberlain of the Principality of North Wales. The farmhouse is noted in a 1548 document, but it’s impossible to tell whether some of that building survives.

In 1740 the Capel Curig churchwardens applied to Queen Anne’s Bounty, a fund the queen had established to give more income to poor clergymen. The bounty commissioners agreed to provide a grant, to be invested in land which would generate income for the curate of Capel Curig and Dolwyddelan.

There was a snag. Almost all of the farmland in the area belonged to three large estates. Bryntyrch was an exception, and eventually Porthmadog-based William Wynne sold it to the commissioners for £400. The curate collected rent from the farm. He in turn paid rent to the king and was responsible for maintaining the farm buildings.

The inn prospered after Thomas Telford’s London to Holyhead coach road (now the A5) was built in the early 19th century. It offered a cheaper alternative to the upmarket Royal Hotel. The Bryntrych Inn had 15 bedrooms in 1881, when it was auctioned along with c.200 acres of farmland.

It had its own stables and coach house, a little further east along the road. In 1898 the landlord, Thomas Roberts, was fined for keeping carriages without a licence. He was bankrupt by January 1899.