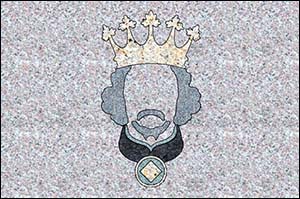 This granite postcard on the prom at Colwyn Bay relates to the ambush of King Richard II at the eastern end of the bay in 1399.

The ambush happened near Penmaen Head, the rocky headland which you can see in the distance if you look across the bay from here. Click here to read our web page about Penmaen Head.

Richard II was born in Bordeaux, France, in 1367. His father was Edward “the Black Prince”, whose own father was King Edward III. Richard was just 10 years old when he became king. Initially his uncle, John of Gaunt, was the effective ruler. 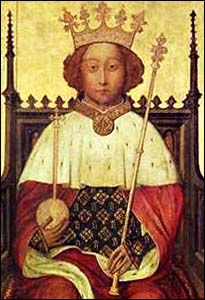 Many of Richard’s policies were unpopular with Parliament. Resentment deepened when John of Gaunt died in February 1399 and Richard confiscated property which would otherwise have gone to John’s son Henry Bolingbroke.

Richard spent the following summer in Ireland. In his absence, Henry gathered influential supporters, some of whom ambushed Richard as he was making his way back from Ireland along the North Wales coast. Richard was deposed in September and died in February 1400. Henry ruled as King Henry IV until his death in 1413.

Richard’s story is told in one of William Shakespeare’s history plays, titled The Tragedy of King Richard the Second.