The River Taff flows just a six hit away from the cricket ground, which lies on the river’s flood plain. The river often burst its banks, causing floods and health problems in Cardiff.

In 1797 local magistrates said a straight new river channel should be dug (east of what’s now Sophia Gardens). Some 25 years later the Marquess of Bute, who owned Cardiff Castle and today’s Bute Park, considered legal action against the owner of land on the opposite side who had planted trees along the waterline and built gravel traps. This was consolidating the west bank – but causing the river to wash away large chunks of the Marquess’ land! Another new cut was made in the mid-1820s. 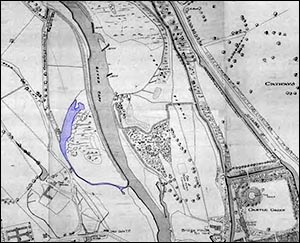 In the 1851 map extract on the right, we've highlighted in blue a remnant of the river’s meandering earlier course. The cricket ground now occupies the land in the top left corner. Cardiff Castle is in the bottom right corner.

Another river scheme, further south, also has a bearing on the history of Glamorgan cricket. In the late 1840s the great engineer Isambard Kingdom Brunel organised a river diversion to enable the South Wales Railway to create a station – now Cardiff Central – in the space between the river and the Glamorganshire Canal.

The diversionary work also reclaimed a large area of river meadow to the west of the Cardiff Arms Hotel, which was situated near the present-day Angel Hotel. This area became known as the Cardiff Arms Park and it was here that Glamorgan CCC played its first match in 1889 and continued to play until 1996. It moved to Sophia Gardens in 1967.

Today the Principality Stadium occupies much of the reclaimed land, hosting pop concerts and other events in addition to sport.

The QR codes for this page are at position no 8 (shown in red) on the map below.