This was the church of a Benedictine priory, founded in the 11th century on land given to an abbey in Le Mans, France. Hamelin de Ballon, Lord of Abergavenny, gave another church, the Parish Church of St John’s, near the market he set up to bring in money to support the castle and town.

In 1320 John de Hastings, Lord of Abergavenny, discovered the priory buildings had been neglected and the five monks and prior had been drinking, gambling and indulging in sexual activity with local women! The priory was reformed and Lord Abergavenny gave more land for its upkeep. 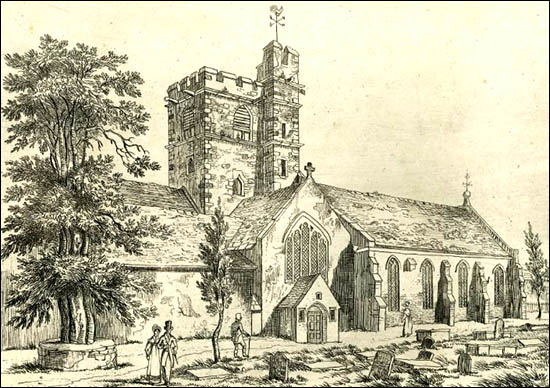 The Black Death in 1349-50 greatly reduced income from rents and crops and by 1400 the priory was in a desperate state. Then came Owain Glyndŵr, who destroyed much of what the Anglo-Norman town of Abergavenny, including the priory outside the town’s East Gate.

In 1428 the Pope gave the priory a grant of indulgence for church repairs, but later that century it was the townspeople who raised the money for repairs and church bells.

By the Dissolution of the Monasteries (1536-40), the priory had become wealthy with rents from shops and houses in the town, a corn mill of its own, a cloth mill, and extensive lands and woodlands in the surrounding area, all paying annual tithes (a tenth of their income) and rents to the priory. The barn where produce was stored still stands near the church.

The townspeople petitioned Henry VIII to allow them to keep the church as the parish church. St John’s Church was too small, so they were already using the body of St Mary’s Church, with the prior and remaining four monks using the chancel.

Henry agreed, and decreed that St John’s should become a Grammar School endowed with some of the tithes. The rest of the land and the priory were sold to raise money for the Crown. James Gunter bought them and built himself Priory House from the priory ruins. Later his son gave some of the land to members of his extensive family. Priory House was demolished in the 1950s, its site now occupied by the Priory Centre.

The church houses the reclining figure of Jesse carved from an oak tree trunk, unique in being made of wood (other Jesse figures are in stained glass). Jesse figures were used in medieval times to show how Jesus was descended from Jesse, linking the Old and New Testaments.

The church holds a remarkable collection of medieval tomb chests and wall monuments. Many important local dignitaries were buried here.

The choir stalls show how boys were bored when they used the chancel while the Grammar School was being repaired! The church has been altered many times since being taken over by the parish. The most recent renovations also restored the monuments.The drawing, courtesy of the National Library of Wales, is thought to show the church c.1840.

The church organ was rebuilt in 1884 under the supervision of gifted young organist Throne Biggs, who boosted Abergavenny’s musical life before his death aged 29. The organ was eventually removed after falling through the floor.

The church’s 10 bells replaced earlier ones in 1947 in thanksgiving for the end of the war. One of the old bells, dated 1308, is displayed in the nave.