This medieval parish church is thought to occupy an earlier Christian site, next to the Gyffin stream but far enough from the Conwy estuary to be hidden from marauding Vikings or pirates! Gyffin takes its name from cyffin, meaning boundary. 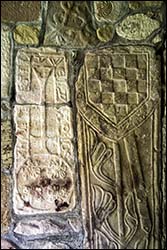 In the 12th or early 13th century a stone church was erected here in the traditional Welsh form of two square chambers, separated by a rood screen. This is now the central section. The church was extended in the centuries after King Edward I built his walled town on the site of Aberconwy Abbey.

The porch has a medieval timber frame and some of its stonework appears to be from old mullions (carved window surrounds) cut into smaller sections – possibly a recycling of the church’s original doorway. The porch door has medieval hinges and 17th-century graffiti!

Also in the porch are two intriguing tomb slabs from the 13th century (pictured right). The Latin inscription on the smaller one states that “Llywelyn ab Iorwerth lies here”. That was the name of Llywelyn Fawr, the first Prince of Wales, whose tomb was evicted from Aberconwy Abbey by Edward I. The slab at Gyffin is too small to cover the prince’s reputed stone sarcophagus in Llanrwst. 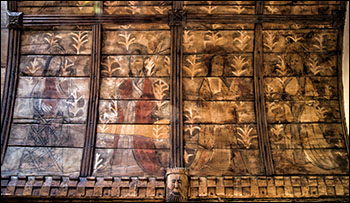 itewash was removed from the vaulted ceiling panels in the sanctuary to reveal paintings from around the 15th century. They show the Evangelists accompanied by female figures and an angel (Matthew), lion (Mark), winged ox (Luke) and eagle (John). The photo below shows part of the ceiling.

The font dates from the 13th century. Here was baptised Richard Davies, whose father Dafydd ap Gronw was curate of Gyffin. As Bishop of St Davids, Richard Davies invited William Salesbury to his palace for assistance with the first Welsh translation of the New Testament, published in 1567. Both are commemorated on the Bible translators’ memorial outside St Asaph Cathedral.

In the Victorian era the church’s sexton for many years was Humphrey Williams. He kept cows in the backyard of the Eagles Inn, where he was the licensee. 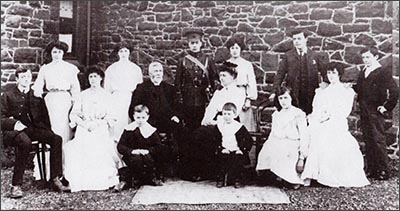 Gyffin rector Robert Jones and his wife Ellen had 13 children (see photo on right). The stained glass window in the nave is a memorial by him to his three children who died in early adulthood. One was Oxford graduate Lieut Griffith Morris Jones, who died on 13 December 1918, aged 28, as a result of illness contracted while serving in the First World War.

Other Gyffin men who died in the war are commemorated on the war memorial in the churchyard, where landscape painter Warren Williams (1863-1918) is buried.

With thanks to Dilys Glynne