The high bridge over the railway near the old quarry hospital is known as Pont Vivian. It was built to carry waste rock from the Vivian quarry to the lake shore, where it was dumped. 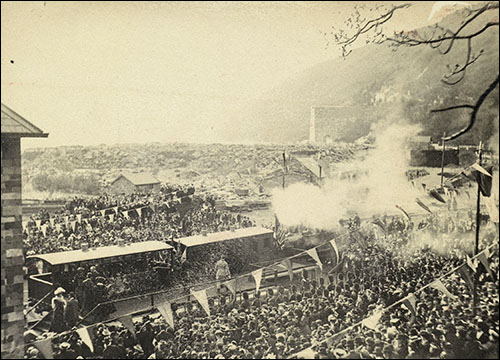 Waste was previously taken from the quarry to the lakeside on a long, low bridge which led directly from the V-series inclines – see the old photo on our page about the inclines.

A railway track was built c.1900 from the inclines to near the hospital. It crossed Pont Vivian to reach a new tipping site. The bridge is a tall stone structure with a small aperture at the bottom for the Padarn Railway – now the Llanberis Lake Railway.

The photo on the right shows Gilfach Ddu when the Prince and Princess of Wales visited in 1902. The quarry workshop building, now the National Slate Museum, is on the left. Pont Vivian rises in the distance – the end facing the lake wasn’t obscured by the large mound of waste rock at the time.

You can see a Padarn Railway locomotive shed from Pont Vivian. It provided covered accommodation for steam locomotives delivered in the 1880s and 1890s. The three locos replaced the two original ones, built in the 1840s, and were never replaced before the railway closed in 1961. They were larger than the steam locos of the Llanberis Lake Railway, which has a narrower gauge than the Padarn Railway did.

As you look along the shore from the bridge, most of the land you can see between here and the museum building is formed of waste rock. The lake shore used to be close to the route of the railway. Today’s railway station is approximately where there was a quay for slate to be loaded into boats in the early period of slate quarrying in the slopes above, in the 18th and early 19th century.

With thanks to the Royal Collection Trust for the photo