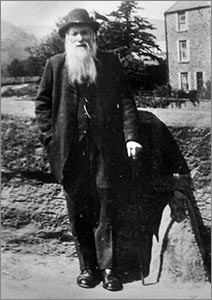 Butcher Samuel Jones, who lived and worked here, had nine sons serving with the armed forces in the First World War. This was thought to be a Welsh record. Later it was home to the first ever shop devoted to Welsh-language books, periodicals and cards.

Samuel (pictured right) was born in St Asaph. He and his wife Hannah (nee Edwards) had 12 children, the first and last of which were daughters. One son, named Pryce (commonly known as “Pye”) was a talented footballer but died aged 19 in 1904. Hannah died after a short illness in 1905, aged 51. Samuel died in 1924, aged 80, having lived his last years in the Llanrwst almshouses.

The nine sons who served in the war were Sergeant Moses, Able Seaman (Naval Transport) Richard and Privates William, Samuel, David, Robert, Albert, Ivor and Arthur. The American Welsh-language newspaper Y Drych commented at the time that it hoped the sons had the same appetite for killing as their father, who lived on killing.

Ivor was killed at the Battle of Loos in France on 25 September 1915, aged 28. He was buried at Cambrin Churchyard Extension, Pas de Calais, and is named on Llanrwst war memorial. He was the only one of the brothers in the regular army (the others volunteered after war broke out), and served in India before the war.

The shop has had many different uses since then and is now home to Slic hair salon. In October 1955, Arianwen and Dafydd Parri opened a bookshop here devoted to publications in Welsh. The business continues to trade, as Bys a Bawd, in a former sweet shop in Llanrwst. Dafydd wrote a popular series of children’s books about a group of young adventurers called Y Llewod. The couple’s son Myrddin ap Dafydd has won the National Eisteddfod’s bardic chair twice and runs Gwasg Carreg Gwalch, the Llanrwst-based publisher of books on Welsh history and other subjects.

Footnotes: More about the brothers 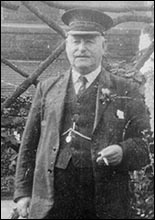 William Jones (born 1882) was an officer’s batman based at Great Yarmouth for part of the war. He may never have gone to the front line. After the war he was a plumber and whitesmith (someone who worked with tin or tinplate).

Moses Jones’ (b.1874) war service interrupted his career with the London & North Western Railway. Known as “Moi”, he became station master at Tŷ Croes, Anglesey, in 1909. He was serving in the forces in 1915, and became station master at Blaenau Ffestiniog in late 1916. When he left that station in 1920, Lord Newborough presented him with a pair of solid silver loving cups. He is pictured right in railway uniform.

Richard (b.1872) had emigrated to Canada before war broke out. 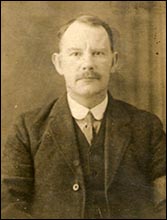 Several of the brothers left Llanrwst after the war because there was too little work locally. Samuel (b.1876, pictured left) moved, with his wife and son, to the Rhondda c.1902 and became a miner at the Cambrian Colliery. Albert (b.1887) followed him soon afterwards.

Robert (b.1881) suffered from gas poisoning at the front. He was badly affected by his war experiences, possibly suffering from shell shock. He sought work in South Wales but, missing Llanrwst, he walked all the way home and lived for the rest of his life with his brother William and family. One of his legs was eventually amputated. He died in 1953, aged 72. 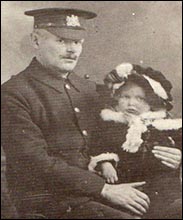 David (b.1878) became a policeman in Manchester before the war and enlisted with the 12th Manchester Regiment in October 1914, at which time he had a scar on his neck. He had been invalided out of the police but was judged fit for military service. He was wounded in the head in January 1916, while serving at Etaples, and discharged as sick six months later. He then worked for engineering company Mather and Platt, before his death from tuberculosis in 1927. The photo (right) shows him with daughter Monica in 1915.

Arthur (b.1890) died in South Wales in 1963, having lived his last years in poverty in a caravan. He had no relatives nearby to attend his funeral, so William’s son Tom and another relative travelled from Llanrwst to Llantrisant for the occasion.