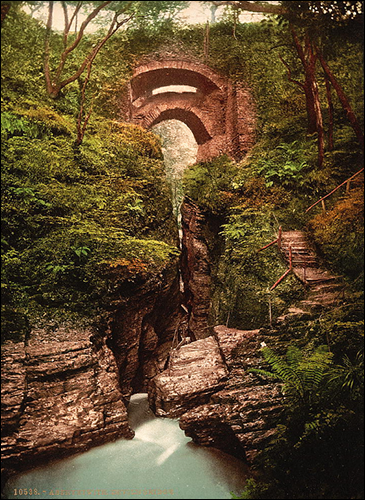 This triple-decker bridge crosses the river Mynach at a deep and narrow gorge. It is pictured right in the 1890s, shortly before the third deck was installed.

The river has been bridged in this vicinity since at least the 12th century, when the priest and chronicler Giraldus Cambrensis (Gerald of Wales) used a wooden bridge here.

According to legend, an old woman was dismayed to find that her cow had crossed to the other side of the river here. The devil appeared and offered to build a bridge, on condition that he took possession of the first living thing to cross the new bridge. The structure was completed in a jiffy. As the old lady walked towards it, the devil salivated over the prospect of winning her soul. The woman stopped short of the bridge and hurled a chunk of bread across. Her dog chased after the bread, becoming the first creature to use the bridge.

The lowest arch of today’s bridge is ancient, and could be medieval. It was repaired around 1753, when a second arch was built to reduce the gradient of descent and ascent either side of the bridge. The older bridge reinforced the vertical walls beneath the newer arch.

In 1901 a new bridge was erected above the older arches, eliminating the change in road elevation. It was replaced in the late 20th century but the 1901 railings were retained.

The Welsh name for Devil’s Bridge is Pontarfynach, meaning “Bridge over the Mynach”. Mynach is Welsh for monk. The river may have got this name from association with a monk’s cell or a one-time boundary of monastic land. The name was recorded as Pont ar Vynach in 1629. The earliest known record of Devil’s Bridge dates from 1734.

There are spectacular waterfalls along this stretch of the river. You can view them and the bridges by following the paths beyond the turnstile. Follow the link below for details. The area is a Site of Special Scientific Interest, noted for its mosses and lichens.