Several memorials were found in a storeroom when the former Ebenezer Chapel was renovated, following closure as a chapel in 2010. Before the building reopened as the Cornerstone arts and community centre, six of the memorial tablets were attached to the perimeter wall to the right of the building. Another memorial was mounted on an internal wall.

The exterior tablets include two war memorials. They commemorate men from the chapel who died in the world wars. See below for their details.

Those who died in the First World War came from Welsh-speaking communities in North and South-west Wales. This provides an insight into the role of this Welsh chapel after English had become Cardiff’s dominant language. 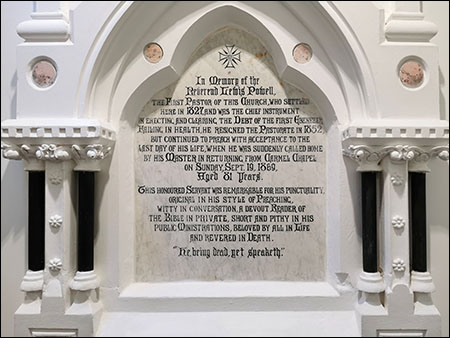 The largest of the memorials, pictured right, is inscribed in English in memory of the Rev Lewis Powell, the first pastor here. The elaborate frame is decorated with circles and squares of Penarth alabaster.

It notes: “He settled here in 1827 and was the chief instrument in erecting and clearing the debt of the first Ebenezer [Chapel].” He resigned in 1852 because of his health. Later the chapel granted him £12 a year for the rest of his life. He continued to preach until he died, on his way home from a Carmel Chapel, Bonvilston, on Sunday 19 September 1869. He was 81 years old.

He was an almost exact contemporary of Daniel Richards, commemorated on one of the exterior tablets. Daniel was the chapel’s first treasurer, from 1826. He lived in High Street and worked as a hatter. He died in 1871 aged 83.

Another tablet honours Asa Morgan, deacon and treasurer for 25 years, who died in 1892 aged 80. He hailed from Whitland, Carmarthenshire, and lived latterly at Crichton Place. He was a builder and undertaker. He had overseen Ebenezer Chapel’s extension in 1852.

The tablet for Hugh Michael Hughes OBE (1858-1933) notes that he was pastor here 1894-1933 and chaired the Welsh Congregational Union 1920-21. He hailed from Llanllechid, near Bethesda, Gwynedd, and had a Masters degree in philosophy. The tablet describes him as a powerful preacher, watchful shepherd, talented writer, sharp thinker, wise counsellor and leader of a denomination and nation.

His successor, Rees Griffiths (1886-1946), is also commemorated. He was minister here 1934-1945. In his last year he was superintended of the denomination’s English-language churches in Wales and Monmouthshire (the county was regarded at the time as separate from the rest of Wales).