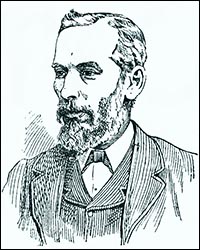 Daniel Owen, the first significant Welsh-language novelist, kept a tailor’s shop in what is now the westernmost part of the pub called Y Pentan.

Owen (1836-1895) lost his father Robert and two brothers when Argoed colliery flooded in 1837, killing 21 miners. His mother Sarah, a relative of the dramatist Twm o’r Nant, was left with two sons and two daughters to bring up.

Aged 13, Owen was apprenticed to Mold tailor Angel Jones. He recalled later that Jones had rescued him from falling into bad company. He started preaching in 1864 and went to study at the Methodist college in Bala in 1865. He left two years later because his mother and sister were unwell, and returned to Jones’ shop.

He went into business with draper James Lloyd to establish the shop in New Street known as Owen and Lloyd. This was sometime after 1875, when 3 New Street was home to Edward Jones’ refreshment rooms.

In 1880 Owen bought his partner’s share in the business, which he continued until his death. Some of the clothes he made are on display at the Mold Museum. There’s a statue of Owen outside the museum.

Owen contributed sermons to the monthly Methodist magazine Y Drysorfa before the same publication serialised his novel Rhys Lewis, one chapter at a time, from 1882 to 1885. Later novels were published in weekly instalments in Y Cymro. Owen based many of his characters on people he met and observed at his tailor’s shop, chapel and elsewhere.

He advertised some of his books as being available from the author at 3 New Street, Mold, A complete copy of Rhys Lewis cost 4 shillings in 1885.

Y Pentan (Welsh for “the hob” or “the chimney corner”) takes its name from Owen’s story collection Straeon y Pentan. When Owen was a tailor here, the Cross Keys Hotel was two doors away along New Street. The pub later expanded into the two adjoining properties. In 2016 the former tailor’s shop was refitted with Victorian chapel pews as seating – a nod to Owen’s chapel background.